According to the victim, identified as Lateef Adeosun, he was almost burnt to death after he caught the herbalist and others with two human heads in his shrine in the community. 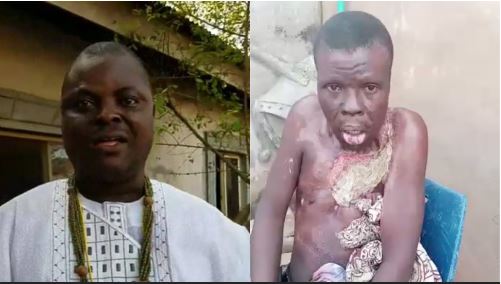 According to a report by SaharaReporters, the Oluwo of Kori Oja town in the Owode Local Government Area of Ogun State, Adebare Ayinla has been accused of ordering his followers to set a man ablaze.

According to the victim, identified as Lateef Adeosun, he was almost burnt to death after he caught the herbalist and others with two human heads in his shrine in the community.

He said, “Debare told me to help him cut grasses in his house, he offered me N1,000. So after finishing his work, I didn’t see him.

“I waited for several hours, so when it was 7:30 pm, I went into the bush where he was working, because he is an herbalist. So when I got there, I saw him with Olawale, I also saw one fat man, he is dark in complexion and has a leg injury. I met some of Debare’s boys, like four of them. Those boys were holding two fresh human heads.

“Seeing them, I ran away immediately. So Debare and Olawale told the boys to run after me. They caught me and took me to their shrine area. They started beating me, they later poured petrol on me and set me ablaze.”

The Baale (traditional ruler) of Kori Oja, Chief Saheed Ogunsolu, also confirmed the incident, saying he had been taking care of the victim.

“I’m the one taking care of him (Adeosun) and I'm the Baale of this community. After the incident, he was unable to talk for seven months. When he started talking, he narrated to us how he saw Debare and others with human heads.

“How he was beaten and set on fire by his boys. He is now responding to treatment.”

Ogunsolu said Ayinla was arrested by policemen from the Federal Criminal Investigation and Intelligence Department (FCIID), Alagbon in Lagos, but was released last week.

When contacted, Police Public Relations Officer (PPRO) in the state, Abimbola Oyeyemi, said he wasn’t aware of the incident.

“I’m not aware but there is no way someone would have set another person on fire and would be released. That’s not possible,” he said.