Sanwo-Olu, who paid an unscheduled visit to the estate amid protest against the continued presence of the armed policemen in the estate. 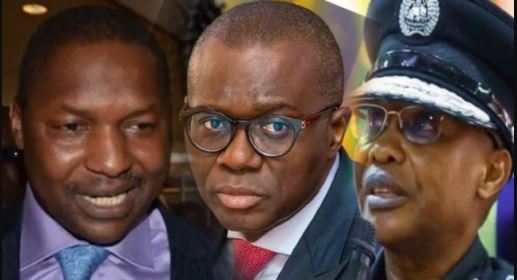 According to a report by The PUNCH, some twenty hours after the Lagos State Governor, Babajide Sanwo-Olu, directed the armed policemen deployed in Magodo Phase 2 estate to disengage their operation, the police detachment has ignored the governor’s instruction by remaining in the estate.

Confirming the development to our correspondent on Wednesday, the Chairman, Magodo Residents Association, Bajo Osinubi, said, “The police are still in the estate. Magodo is a very peaceful estate, with no riot, banditry, kidnapping, they can as well remove the police and take them to violent flashpoints and not Magodo.

“The Governor has intervened in the case; he came in yesterday and has called for a meeting today, so what are the police still doing in Magodo. He is the Chief Security Officer in the state.”

Sanwo-Olu, who paid an unscheduled visit to the estate amid protest against the continued presence of the armed policemen in the estate on Tuesday, said the case was between the judgment creditors claiming ownership of landed property and the state government.

He, however, told the team leader of the detachment that the case had nothing to do with landlords and residents in Magodo Phase 2, adding that “as the Chief Security Officer, you don’t have any business to be in my state right now and I want you to disengage.”

Instructing the team leader to call his superiors in Abuja to tell them he wanted them to leave his state, the team leader told Sanwo-Olu that “I am here on the instruction of the Inspector-General of Police, through the AGF. I am too small or too low to call them.”

Despite the Governor insisting that the Anthony-General of the Federation, Abubakar Malami, told him he was unaware of the operation, and that he had spoken extensively with the Inspector-General of Police, Usman Baba, the team leader refused to budge and had continued to station his team in the estate.