Magodo: How Military Gov. Took Over Our Lands, Allocated To Eminent Citizens – Landlords


His revelations come amid the escalating tension in Magodo, a choice area of the state known to be occupied by the upper class. 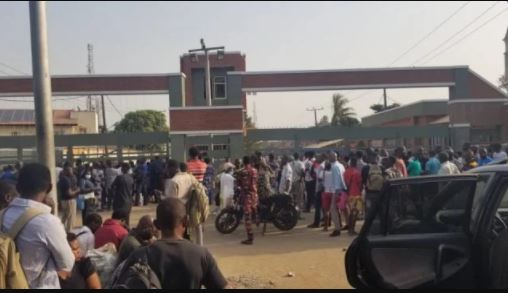 Adebayo Adeyiga, the Chairman of Shangisha Landlords Association, has narrated how a military governor of Lagos State, Air Commodore Gbolahan Mudasiru (now deceased) demolished their houses and took over their landed property in what is now known today as Magodo Phase 2 Estate area of Lagos State, according to The PUNCH.

According to Adeyiga, the then military governor in 1985 claimed that an international hospital and other social infrastructure would be built on the site but the area was shared with eminent Nigerians afterwards.

Adeyiga made this known on Wednesday in an interview with Channels Television monitored by The PUNCH.

He said, “In 1985, our houses that were built on the land were demolished by the then military governor of Lagos State claiming that the area would be used for international hospital and other programmes that would benefit the masses.

“After the demolition, we found out that the area is being shared by civil servants and eminent Nigerian citizens.”

His revelations come amid the escalating tension in Magodo, a choice area of the state known to be occupied by the upper class.

For days, armed policemen besieged the estate in the company of suspected land grabbers and members of a family who had planned to demolish property in the choice estate to execute a Supreme Court judgment. The suspected land grabbers including thugs stormed the estate with bulldozers after marking many houses for demolition. The development has caused commotion at the estate as landlords perpetually shut the entrance gates while tenants panic over their fate.

The policemen were reportedly sent by the Inspector-General of Police, Usman Baba; and the Attorney General of the Federation, Abubakar Malami (SAN).

On Tuesday, the security agents defied the order of Lagos State Governor, Babajide Sanwo-Olu to vacate the estate, leaving many residents hopeless, even as the governor said a meeting would hold on Wednesday to address the feud between the parties.