Farmers And Herders Clash In Kwara


The unfortunate incident started after a farmer and his two sons confronted a herder who was caught grazing on their cassava farm with his cattle. 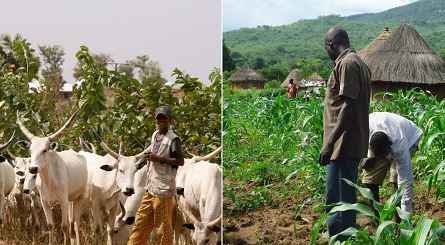 Farmers And Herders Clash In Kwara

A clash between farmers and herders in Kwara state has led to at least three persons sustaining severe injuries.

A farmer, Alaparo Tunde and his two sons, Saheed Tunde and Taofeek Tunde, from Alaparo village reportedly confronted a herder, Haruna Adamu, who was caught grazing on their cassava farm with his cattle.

The confrontation between the farmers and the herder, it was further gathered resulted in hot argument and consequently the two parties engaged in bloody fight where cutlasses and other dangerous weapons were freely used.

Spokesman of the Nigeria Security and Civil Defence Corps in Kwara State, Babawale Zaid Afolabi disclosed that both the herder and two sons of the farmer were seriously injured in the incident which occurred at Alapa, Asa local government area of Kwara State on Saturday January 8.

“It took the timely intervention of the operatives of the Agro Ranger Unit of the Nigeria Security and Civil Defence Corps, Kwara State Command to prevent what could have resulted in a full-scale bloody clash between farmers and herders in Alapa community in Asa local government area of Kwara State.

“The Agro Ranger Unit of the Corps got a distress call from Alapa community and promptly deployed officers to the scene of the incident.

“On Saturday 08/01/2022, based on a distress call from Alapa community in Asa local government area of the state, our Commandant, Makinde Iskil Ayinla directed the immediate deployment of the operatives of the Agro Ranger Unit to the location and thier timely arrival put the situation under control.

“Both the herder and the farmer’s two sons were seriously injured and were later taken to nearby hospital where they are responding to treatment.

“In the meantime, security has been beefed up in the community while full scale investigations are ongoing to unravel the immediate and remote cause of the incident and how to prevent any act of reprisal.”