The erring driver also killed a third person and would have also killed the older one of the deceased siblings. 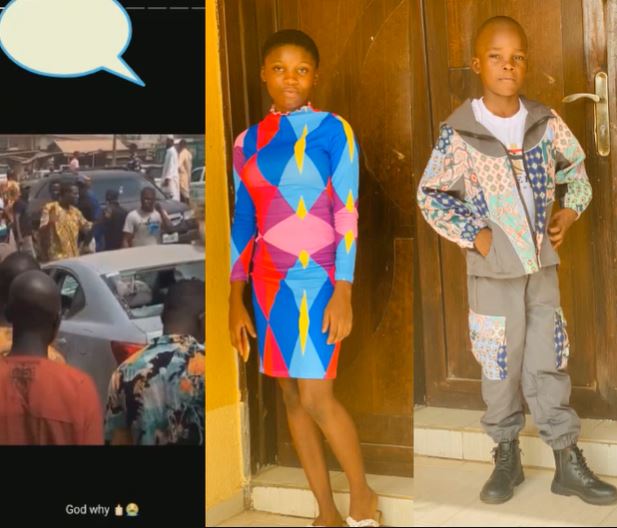 The deceased, Olamide and Damilola


The Opayemi family is seeking justice after a reckless driver crushed two of their children, Olamide(15) and Damilola(11) to death last Friday, January 7.

Their uncle, Yomi Opayemi, who took to his Facebook page to mourn them, said the driver was leaving the police station with his car that was earlier ceased for reckless driving when he rammed into the two children and killed them.

Mr Opayemi said the erring driver, Moshudi Badmus Al-hassan, also killed a third person and would have also killed the older one of the deceased siblings.

Demanding justice for his niece and nephew, Mr Opayemi wrote;

Friday 7th January 2022 will remain a black day in our family and the entire Ilisan Remo in Ogun State for a long time to come!

Less than 400meters away from home and just within 5minutes that they left home,the inconceivable occurred!

A recalcitrant ,*moshudi badmus al-hassan*,drove a lexus car released from police custody having committed near-murder traffic offences earlier and within an hour of release,killed three people in two different towns!

Two of them my elder brother's children!Two children from same parents crushed to death by reckless driver in Ogun (photos)

Ola and Dammy,if only you knew that yahoo-yahoo-crackhead and undisputed reckless spoilt brat was going for a kill that morning,you would have remained indoors like you have done for the better part of the week and previous!

*JUSTICE YOU WILL GET.*

This will not be swept under the carpet like most of moshudi's numerous heinous crimes.

*Money won't pervert the course of Justice this time around.*

Rest your gentle souls will find.

Olamide and Damilola,your parents haven't stopped crying all day long since then,no one can console them understandably,only God!

Your siblings are still in shock,especially your elder sister kanyinsola who escaped death by a whisker..she goes to the hospital for dressing of wound sustained from the same spot you were both killed!

Your cousins and the family at large mourn your painful and sudden exit.

Your friends in Mayflower school are asking questions.You should be resuming for the new term today! 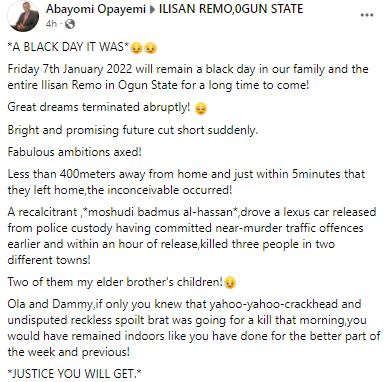