The boy was allegedly taken by unknown people who claimed they were friends of the missing boy's father. 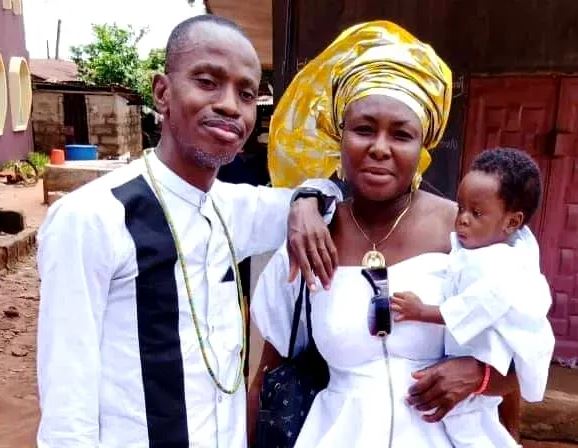 The parents and their missing son

The parents of a 1-year-old boy, Fabulous Michael Onwudiachi, are seeking the help of the public in search of their son who was reportedly abducted on Thursday afternoon, January 14, in Jikwoyi, an outskirt of Abuja.

The distraught father, Raymond Onwudiachi, a staff of the Ministry of Defence and known by many as “Yankee Mouse” said at about 2pm on Thursday his 9-year old daughter, Favour, and 7-year old son, Famous, had returned from school to their mother’s shop in Jikwoyi and were asked to take their baby brother, Fabulous, to their grand mother’s residence for lunch, a distance of about ten meters.

According to Mr. Onwudiachi, that had been the routine for his children each time they returned from school. He said the children love their grandmother’s culinary expertise and would always request that they be allowed to have lunch at her place after school.

The distraught father said a few minutes after they left, the elderly siblings rushed back to their father who also owns a shop in the area asking why he should send a “friend” to offer them some money and biscuits and take Fabulous from them.

He said it was at that point that he realized that there was trouble and immediately contacted his wife who was shocked by the incident and both rushed to Jikwoyi police station to report the case.

“I cannot say if it is kidnap, abduction, stealing or anything. My son Fabulous is only one year plus, so who did I offend?

I appeal to those holding my child to please return him and if need be take me instead. I owe no one. I am a peace loving Nigerian”, he said tearfully

The FCT police command is yet to react to this development.