The suspect led the police to his backyard where he had mutilated her body, packed them into sacks, and then buried them. 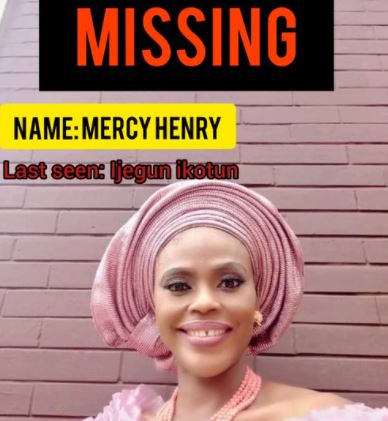 The mother of two, Mercy Henry who was reported missing in Lagos state in December 2021, has been found dead and her body mutilated and packed into sacks.

Mercy went missing on December 16 after she left her home to see a trado-medical doctor in Ijegun, a suburb in Lagos state. She however did not return home on the said day, leaving her family in total despair.

They began to call all her friends and one of them named Ayo who resides in Port Harcourt, informed them that on that same day, Mercy called her asking for a N30, 000 loan.

According to Ayo, Mercy told her that she was ill and needed the money. Ayo told the family that the money left her account by 1.59pm on the same day and that by 2.02pm, Mercy's phone was turned off and had remained switched off.

With her information, the police traced the account she sent the money to one Mayowa who happened to be Mercy's Trado-medical doctor. Mercy had given birth to one of her daughters with the assistance of Mayowa.

Using the information supplied by Ayo, the police went to First Bank, and with the assistance of the Bank, Mayowa, the account holder that received the N30, 000, was arrested.

When interrogated, Mayowa claimed to have seen Mercy four years ago when she came to his traditional birth center to deliver a baby girl. However, his phone history and chats showed that he and Mercy spoke on December 15 at about 9:00p.m.

In an interview with LIB, Mercy's younger sister, Promise, confirmed that Mercy has been found dead. She said Mayowa confessed to killing Mercy after one of the other three persons arrested in connection with her disappearance confessed that they killed her.

The suspect led the police to his backyard where he had mutilated her body, packed them into sacks, and then buried them. Promise stated that Mayowa didn't give any reason for killing mercy but it is believed that it was for ritual purposes.

She said he is currently being held at the State Criminal Investigation Department SCID.