The fire, which lasted about three hours on Saturday, razed the mortuary building located behind the hospital facility. 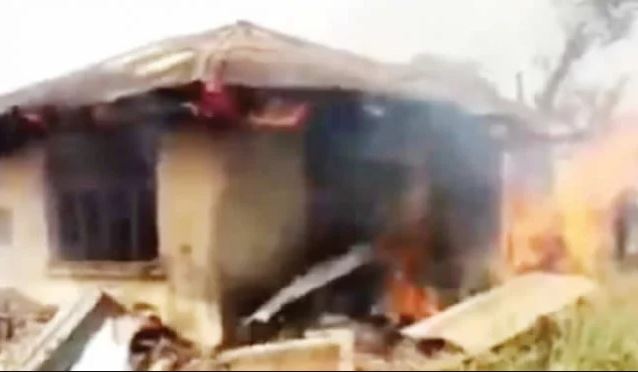 In what will come across as a really shocking development, more than 400 corpses have been burnt in a fire incident at the mortuary section of the General Hospital, Onitsha, Anambra State.

The fire, which lasted about three hours on Saturday, razed the mortuary building located behind the hospital facility.

The fire was said to have emanated from a burning bush behind the morgue.

PUNCH Metro gathered that when the fire started, mortuary attendants poured water mixed with detergent to douse the flame.

However, when the fire escalated, they called the state fire service.

When our correspondent visited the scene on Sunday, it was a gory sight, as families who deposited corpses in the mortuary lamented the situation.

Some, who had come to carry their corpses for burial, burst into tears when they saw that the mortuary was in ruins.

One of them, Charles Ozor, said, “We came to take the corpse of a community member for burial only for us to see that the corpses in the morgue had been burnt beyond recognition. We are confused; we don’t know what to do.”

An eyewitness, who did not want to be identified, recalled that someone had cleared the bush behind the morgue and set it on fire.

He said, “The bush is a bit far from the mortuary. But before we knew what was happening, we saw that the roof of the mortuary had caught fire. There were over 400 corpses inside the building. The entire place was engulfed in fire. Before firefighters came, the fire had caused a lot of damage; most of the corpses were burnt to ashes and some beyond recognition.

“The firefighters battled to stop the fire from escalating to other buildings. In fact, the water in their tank finished; they had to go and refill elsewhere because the hospital does not have a water facility on its premises.”

An auxiliary worker, who did not mention her name, told PUNCH Metro that the morgue had been contracted to a private operator.

The operator of the morgue, who identified himself simply as Emma, said, “I had gone to Awka to bring some corpses. While I was there, I was informed about the fire on the phone and I rushed down immediately. Before I arrived here, the fire had done a lot of damage.

“The fire burnt both fresh and abandoned corpses packed inside the morgue. The chemicals we used in preserving the corpses must have aggravated the fire. The chemicals are highly inflammable and they burn faster than fuel.”

The Director of the Anambra State Fire Service, Mr Martin Agbili, who confirmed that the fire was from bush burning, added that firefighters battled to stop the fire from spreading to surrounding buildings.

He said, “We received a distress call from the General Hospital, Onitsha, and we deployed our men and the firefighters’ equipment to put out the fire.

“We found out that the fire came through the bush and we have been telling people to ensure that they cut the bushes around their houses and avoid bush burning because this harmattan period, fire can come from anywhere, even from a far distance, because every surface is dry and inflammable.”

He noted that though there was no loss of lives, those who tried to put out the fire sustained varying degrees of burns.

Burnt corpses still littered the vicinity of the morgue as of the time of filing the report.