Yusuf who is currently under EFCC investigation for stealing N2billion while serving as Director of Nigerian Navy Accounts also acquired different properties worth billions of naira between 2006 and 2011 when he was Defence Intelligence Agency (DIA) Director of Finance. 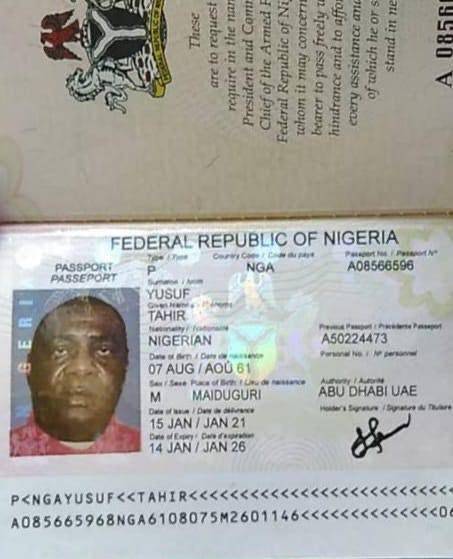 Rear Admiral Tahir Yusuf (retd.), a former Director of Nigerian Navy Accounts, on the wanted list of the Economic and Financial Crimes Commission (EFCC) has again been caught in a web of controversies regarding his acquisition of multi-billion naira worth of properties across the country, according to SaharaReporters.

Sources told SaharaReporters that Yusuf who is currently under EFCC investigation for stealing N2billion while serving as Director of Nigerian Navy Accounts also acquired different properties worth billions of naira between 2006 and 2011 when he was Defence Intelligence Agency (DIA) Director of Finance.

“Rear Admiral B.T Yusuf started as the Assistant Director of Finance, Defence Intelligence Agency (DIA) as a Navy captain under General Sa'id Mohammed and General Babagana Mongono (the current National Security Adviser to President Muhammadu Buhari), both of whom were Chief of Defence Intelligence (CDI), which is the official nomenclature of the head of the DIA before moving as a Director in the same office from 2006-2011.

“He left for the National Institute for Policy and Strategic Studies (NIPSS) and after his study there, he was transferred to a Naval School in Owerrinta in Abia State sometime in 2013. His stay at Owerrinta was brief because he was later appointed as the Director of Navy Accounts and budget in 2015.

“Most of his properties and big investments were acquired while he was in the Defence Intelligence Agency. His hotels in Zaria, Kaduna and Maiduguri, a farm in Zaria, houses in Abuja, Kaduna, Zaria and many other states but mostly being fronted by his close allies and family members.

“Emerald suite in Zaria was bought from Alhaji Abdulkadir Magagi. Grand Pinnacle luxury Hotel in Maiduguri was built in 2010, but fronted by one Alhaji Aliyu Ibrahim Damchida as the owner and Director, other Directors are; Senator Audu Kwari representing Kaduna North Senatorial constituency and Abubakar Usman, who is the older brother of Rear Admiral BT Yusuf.

“In 2015, Tahir paid so much money into his companies, personal accounts and also fixed huge amount of money in fixed deposit accounts amounting to hundreds of millions while he was the Naval Director on Accounts and Budget in the Nigerian Navy under Vice Admiral Usman Oyibe Jubrin,” a source told SaharaReporters.

In 2020, Justice Ijeoma Ojukwu of a Federal High Court in Abuja ordered the permanent forfeiture of about N500 million found to be fraudulently amassed by the military officer to the Nigerian government.

Yusuf, previously second-in-command to the Chief of Account and Budget, Naval Headquarters (NHQ), held the cash in seven accounts - both private and corporate in two banks.

However, Yusuf sneaked back to the country in October 2021 after he illegally obtained an international passport with the help of some corrupt government officials through Niger Republic, a source had told SaharaReporters.

The source added that the fugitive had been moving round the country with military guards provided by the Nigerian Navy authorities.

“The Admiral ran to Dubai about four years back. Before then, the EFCC and NIA had asked the Nigerian Immigration to place him on a watch list and have him arrested at the point of entry or exit. Interpol too,” the source had told SaharaReporters.

“While he managed to escape abroad with his connections and deep pocket, his passport expired while in Dubai. Now because of the restriction on his passport, he couldn't renew it. He went to the Nigerian Embassy in Abu Dhabi, UAE and wanted to bribe his way to getting his passport renewed. After realising who he was, and the restrictions, they refused. He now used some contacts in Nigeria to have a fake passport done for him and sent to him to Dubai. This is what he used to renew his residency in Dubai and it is the same fake passport he used to move out of Dubai, to Niger Republic and then Nigeria.

“This is the fake passport. He claimed to have renewed it in Abu Dhabi. But all passports renewed in Abu Dhabi carry only one passport number. This means he renewed his here in Nigeria. And last two months, the new passport number was checked and it wasn't on the data base of the immigration. And how can he have renewed it here when he was in Dubai at the time? He has insiders in the Immigration and they have been looking for a way to put him on the data base.

“He entered Nigeria through Niger republic and has been moving with military driver and orderly.”