Igwe, in a letter addressed to the IGP, said residents of Ezza North Local government area of the state accused the deceased of "harmful magic" and praying by river. 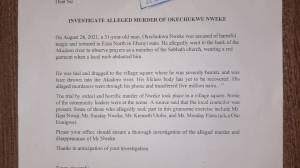 Dr Leo Igwe, a human rights’ advocate, has petitioned the Inspector-General of Police, Usman Baba, over alleged torture and murder of a man, Okechukwu Nweke, by hoodlums from a community in Ebonyi State.

Igwe, in a letter addressed to the IGP, said residents of Ezza North Local government area of the state accused the deceased of "harmful magic" and praying by river.

The community beat him up and threw him into the Akadoro river where he drowned.

The human rights activist said the incident happened on August 28, 2021, stressing that IGP Baba should investigate the matter and bring the perpetrators to book.

A copy of the letter which has been acknowledged by the IGP office on Monday was seen by SaharaReporters on Tuesday.

It partly read, "On August 28, 2021, 31-year-old man, Okechukwu Nweke was accused of harmful magic and tortured in Ezza North in Ebonyi state. He allegedly went to the bank of the Akadoro river to observe prayers as a member of the Sabbath church, wearing a garment when a local mob abducted him.

"He was tied and dragged to the village square where he was severely beaten and was later thrown into the Akadoro river. His lifeless body has yet to be recovered. His alleged murderers went through his phone and transferred five million naira

"The trial by ordeal and horrific murder of Nweke took place in a village square. Same of the community leaders were at the scene. A source said that the local councilor was present. Some of those who allegedly took part in this gruesome exercise included Mr. Ikpa Nwaji, Mr Sunday Nweke Mr. Kenneth Utobo, and Mr. Monday Eleta (aka Oso).

"Please your office should ensure a thorough investigation of the alleged murder and disappearance of Mr Nweke. Thanks in anticipation of your investigation."