The body said the position of individuals on who succeeds President Muhammadu Buhari in 2023 should not be regarded as a general one. 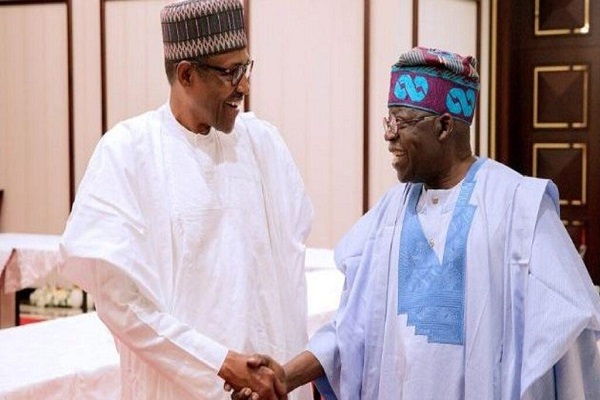 Muhammadu Buhari and Tinubu
Miyetti Allah Cattle Breeders Association of Nigeria (MACBAN) has denied reports that it endorsed Bola Tinubu, the ex-Lagos State Governor to succeed President Muhammadu Buhari in 2023.
The body said the position of individuals on who succeeds President Muhammadu Buhari in 2023 should not be regarded as a general one.
MACBAN National Secretary, Baba Ngelzarma issued a rebuttal on Wednesday.
The scribe stressed that the association respects the ambition of all aspirants and was yet to pitch its tent with any of them.
“The attention of MACBAN headquarters has been drawn to stories in the media claiming that we have endorsed the presidential aspiration of Sen. Ahmed Tinubu.
“We want to make it clear that the association has not endorsed any candidate. Those who endorsed Tinubu are doing so as individuals.
“MACBAN should not in any way be dragged into the politics of endorsement at this stage,” Ngelzarma said.
On January 10, Tinubu formally informed Buhari of his desire to become the All Progressives Congress (APC) flagbearer.
On Tuesday, the party chapter in Lagos accused opponents of making unsubstantiated claims  to scuttle the APC leader’s bid.
Top Stories