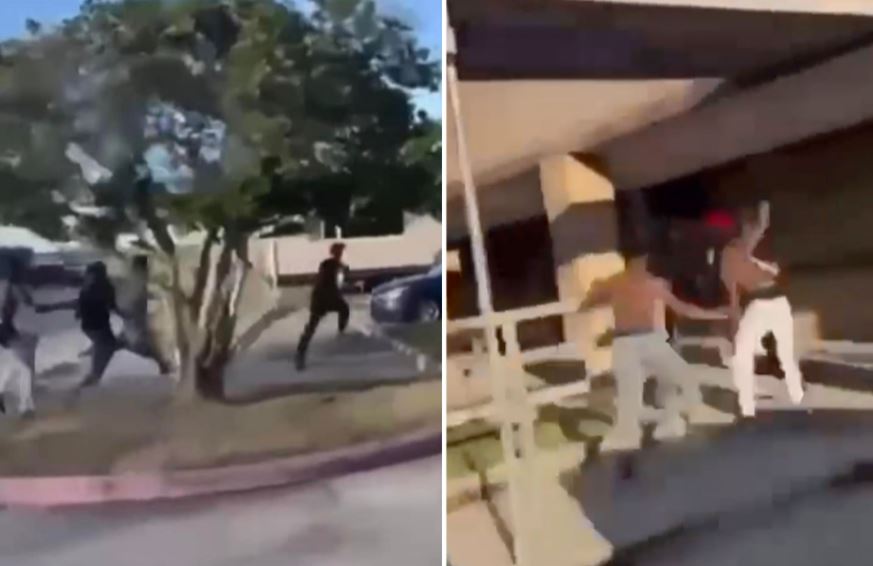 A group of middle school students chased and mercilessly beat up a physics teacher who broke his arm in Texas, a new video shows.

Cellphone video posted on reddit  shows Shott running away at full speed through the high school parking lot, while several students pursued him.

As he was being pursued other students could be seen taking videos of the attack on their phones.

At one point, the attackers catch up and force their coach to the ground, before he gets up and runs out into an area of the parking lot away from them.

Shott’s mother, Peggy Shott, told KTRK that her son suffered a broken arm as a result.

“He’s doing fine. He’s at home. He has a broken arm, but the kids said that he’s doing what he’s always done and he’s fine,” she said.

“The reason it happened to him was because he was doing his job. He stopped the kids. Well, there was only one kid at first. The reason the others came back is because they didn’t like him stopping them.”

According to local station KABB, the coach was attacked because he told the students they couldn’t ride dirt bikes or ATVs on school grounds.

Following the altercation, Cypress Fairbanks Independent School District confirmed that the school received threats of more violence on social media, which prompted the deployment of security officers at the school.

The four students involved in the attack were taken into custody and will be disciplined according to the code of conduct, district officials said in a letter to parents.

It’s unclear if the juveniles will face charges for the beatdown.

“Our campuses must be the safest places in our community for students, staff and visitors,” School officials said in a statement .

“We will not tolerate anyone compromising the safe environment of our campuses, and will address violations to the greatest extent possible.”