In a video shared to Grimsby Live, he picks up the rusty handgun covered in mud and explains that he found his "first gun". 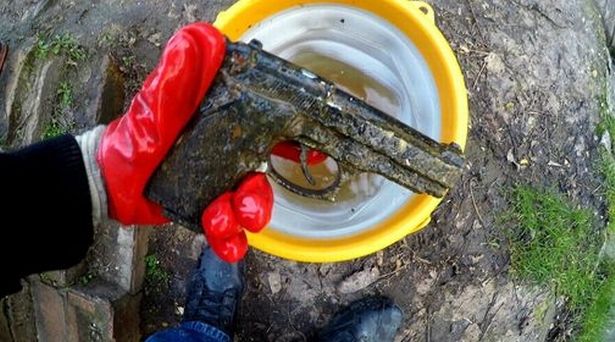 Daily Star UK reports that a magnet fisher was recently stunned when he "caught" a loaded gun in a river close to a primary school.

Houdini Richards, said he had a hunch that he pulled out a live weapon given the heavy weight of the pistol just when he was dangling a magnet attached to a rope into water of River Freshney in Grimsby, Lincolnshire, on Friday (February 26).

In a video shared to Grimsby Live, he picks up the rusty handgun covered in mud and explains that he found his "first gun".

"Look at this bad boy here, looks like a 9mm," Houdini says while bringing the camera closer to the weapon.

"Obviously we have to call this in, I think it's real given the weight of this is quite heavy."

The enthusiast told the site: "We chucked it into a bucket to wash it off and obviously we checked the safety and tried to get the magazine out.

"It had been encrusted but by that time you could feel it was a really heavy-loaded weapon.

"We put the video on so we could notify the police about how we found it and where we found it and we bagged it up and spoke to a resident who lived on the corner house just as we were pulling it out."

Houdini also found a knife from the river as well and he said the location just behind a Primark store and not too far from a primary school.

Houdini and his friends packed up their gear and headed to town and reported to the police officers.

They were told by the police that it was a live weapon.

The fisher found it scary knowing the fact that people were walking around with guns in Grimsby.

Houdini added: "I've noticed recently that there's been an increase in knife crime in the area, not just in this area but sweeping across England recently.

"But guns is not something you hear of. I've heard of the odd gun in big cities like London, but in a small town like Grimsby it is quite scary knowing that people are walking around with 9mm guns."