Usmanov was on a list of billionaires to face sanctions from the European Union in response to Russia’s 24 February invasion of Ukraine. 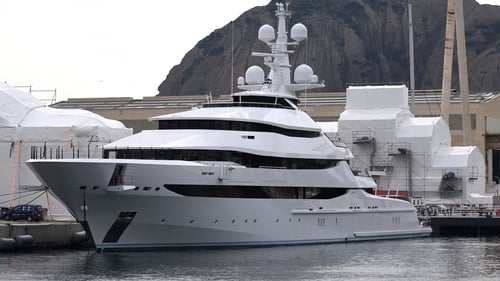 A $600m superyacht belonging to Russian billionaire Alisher Usmanov in a Hamburg shipyard has been seized by the German government.
Alisher Usmanov was on a list of billionaires to face sanctions from the European Union in response to Russia’s 24 February invasion of Ukraine.
Usmanov’s 156-metre (512-foot) yacht Dilbar, valued at $600m and regarded as the largest motor yacht in the world by gross tonnage, was seized by German authorities on Wednesday, according to a Forbes report based on three sources in the yacht industry.
The yacht has been in the yards of shipbuilding firm Blohm+Voss since late October.
A spokesperson for shipbuilding firm Blohm+Voss declined to give a statement when contacted by the Guardian, but said that all projects by shipbuilder Lürssen would be treated “in accordance with the law”.
Also, the French government confirmed on Thursday that it had seized a superyacht owned by a company linked to Igor Sechin, chief executive of Russian energy giant Rosneft and close confidant of President Vladimir Putin.
The vessel, Amore Vero, was seized at a shipyard at La Ciotat, near Marseille, the finance ministry said.
"French customs carried out the seizure of the yacht Amore Vero in La Ciotat as part of the implementation of sanctions by the European Union against Russia," a statement said.
The yacht was owned by a company "in which Sechin is the main shareholder".
Olivier Dussopt, the French minister of public action and accounts, tweeted a photo of the yacht and wrote, "As part of the implementation of European Union sanctions against Russia and in support of Ukraine, we seized a first yacht."
Top Stories