The Chief of Staff to President Muhammadu Buhari, Prof Ibrahim Gambari, disclosed this yesterday in Asaba 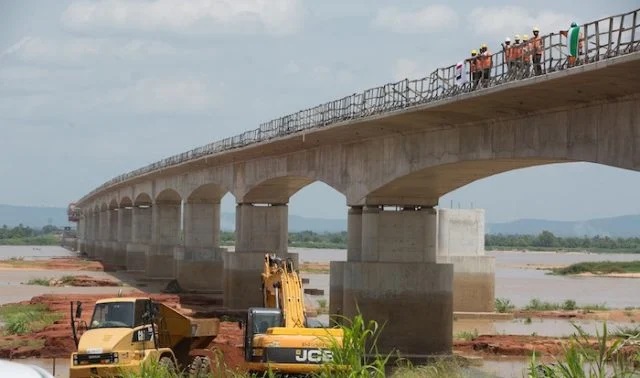 Motorists will not use the Second Niger Bridge for free, the federal government has revealed.
Motorists plying the bridge will pay tolls when it is completed.
The Chief of Staff to President Muhammadu Buhari, Prof Ibrahim Gambari, disclosed this yesterday in Asaba while inspecting major Federal Government legacy projects across the country.
The CoS, Naija News understands, was accompanied by the Minister of Works and Housing, Mr Babatunde Fashola (SAN); his Labour and Employment counterpart, Dr Chris Ngige; Managing Director of the Nigeria Sovereign Investment Authority (NSIA), Mr Uche Orji and other top government officials.
Speaking on the Second Niger Bridge project which is near completion, Gambari said a National Tolling Policy has been drafted by the Federal Executive Council (FEC) in respect to the operation of the road.
According to him, if the road was tolled, there would be an alternative route, “so, when this bridge is tolled, the old bridge is an alternative route, so you have the choice to make between speed and price.”
Gambari also clarifies the funding of the project.
He noted that it cost the Federal Government about N400 billion, in addition to the N10 billion committed into the project by the administration of former President Goodluck Jonathan.
The CoS said contrary to insinuations, the project is being funded 100 per cent by the Nigerian government.
Gambari in a press release on Wednesday through the Director of Press and Public Relations of the Ministry of Works and Housing, Boade Akinola, stated that tolling the bridge was not the key issue for the federal government but to get the project delivered.
While boasting that the bridge would be completed by April 2022 and commissioned by President Muhammadu Buhari before the end of the year, the CoS described the bridge as a national infrastructure with immense socio-economic benefits for the contiguous states and the entire nation.
In his remark, the Minister of Works and Housing, Babatunde Fashola, said the major responsibility of the government was to deliver the project in collaboration with NSIA.
Confirming Gambari’s word on a collection of levies from motorists, Fashola said that the ministry had secured the approval of the FEC on a National Tolling Policy that is of international standard.
“Concessioning of projects is regulated by law. There are rules on how it is done.
“We are currently supervising the concession of 12 highways across Nigeria through the Highway Development and Management Initiative (HDMI) and the process is opened to the general public.
“So, if we choose to concession this one, it will also be opened to the general public,” he said.
The Minister said work on the bridge had reached an appreciable level and appealed to the communities around the impressive Second Niger Bridge project to bear with the Federal Government as power supply was going to be interrupted for two weeks to put finishing touches to the project, adding that adequate notice would be given ahead.
Top Stories