The former Minister said that the mission to get a Nigerian president of Igbo extraction is on course. 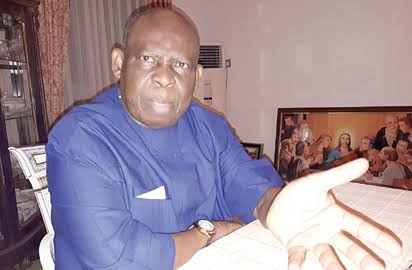 The Igbos are united in their quest to produce the next President of Nigeria come 2023, elder statesman and Former Minister of Health, Prof ABC Nwosu has revealed.
According to him, the mission to get a Nigerian president of Igbo extraction is one mission every Nigerian should focus on in order to advance nation building.
Speaking to Sunnewsonline, he said;
I am fully back now to work with my colleague on the subject of nation building and presidency from the South East. I am glad to tell you that our determination to produce a Nigerian president from the South East zone is still on course.
It is very realisable now than when we started. The reason is very simple because you can’t build any nation on injustice, unfairness and inequity. A nation must work for all its citizens. You can’t have a nation of different citizens and  when it is time to give to the nation the best, you exclude certain citizens.
Nigeria is now going through one of the most trying times of its history and nationhood and it needs all citizens to put hands on deck to pull Nigeria from the brink. It cannot be business as usual of dishing out patronages, collecting oil blocs, importing petrol and hoarding petrol-dollar outside the country. Something new and drastic has to happen this time and that strengthens me that coupled with equity and justice, it is the South East that has the best chance to produce the next Nigerian president.
When asked if the igbos were ready for the task at hand, Nwosu said;
Ndigbo are more ready than any other group has been in Nigeria in the struggle for the presidency. First, you can feel it in the blood of every Igbo person that there is a glass ceiling stopping them from attaining certain political positions in their own God-given country. Ndigbo are being made to think that the civil war is not over and they really cannot be trusted in their own country by their fellow citizens. Throughout Igbo land especially among the youths, the feeling is palpable that when it comes to political positions, appointments and patronage, Ndigbo are made to remain on the fringes as second class citizens. Consequently, the 2023 presidency has become for Ndigbo a sort of DNA test as to whether they are children of the same patent, Nigeria, with the other citizens. They will engage other Nigerians fully on this and will not take any closet discrimination anymore.
Too many times, Ndigbo are told that they are the same with others whereas there are pent-up prejudices hidden in their closet. All these must come out in the open, by the way we will engage other groups in Nigeria for this our quest for presidency from the South East zone.
As for being united, growing up in Nigeria in the 1940s and 50s when I was in primary school, what Ndigbo were feared for in Nigeria was their unity as exemplified by the Igbo State Union, which was then banned as soon as the government got a chance. It is therefore intriguing now that they are looking for the presidency that it is being said that they are not united. That is the irony that makes Ndigbo think that whoever says this kind of thing is not sincere. Ndigbo are very united in their quest for the presidency.
Top Stories