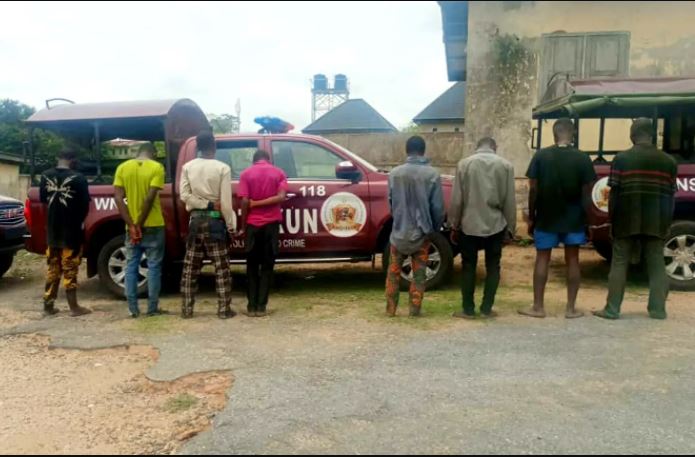 Uchenna Alom, a 42-year-old suspected member of a robbery gang, has disclosed that he was invited to Osun from his Lagos base to be part of a gang that intended to burgle a cement shop in Ilesa.

The suspect while speaking with journalists when Osun Amotekun Corps paraded the seven man gang at Osogbo Command office, Asubiaro, said he usually comes to the state to trade in cooking oil before he was invited by one Adekunle Joseph for the job.

He added that he was arrested upon reaching his hotel in Modakeke, Osun State by Amotekun operatives after which Adekunle was lured to the hotel by the operatives through his (suspect) phone.

“I am a trader, dealing in cooking oil. Adekunle used to collect money from me and we became friends. He called me one day and told me to come join him to burgle a cement shop in Ilesa and I agreed to come. But on getting to the hotel last week Tuesday, I was arrested by Amotekun operatives”, he said.

However, Adekunle while admitting knowing Uchenna, said he did not asked him to be part of the job, rather, Uchenna invited him to join the gang to perpetrate the robbery.

“He was lying, it is true I know him, I do collect money from him whenever he moves oil out of the town, but he was the one that invited me from Iragbiji, where I live to join the gang for the operation. I traced him to the hotel and unknown to me, Amotekun operatives had already surrounded the place and I was caught right there”, he confessed.

The Corps Commandant, Comrade Amitolu Shittu had earlier disclosed that the gang was arrested at their hotel in Modakeke on Tuesday March 8, 2022, upon intelligence about their intention to burgle a shop.

He said they confessed to breaking shops in some parts of the state and carting away valuables in the past.

The suspects will handed over to security operatives for discreet investigation.