According to the drug enforcement agency, not less than N1.4bn passed through Kyari’s account while he was commander of the IRT. 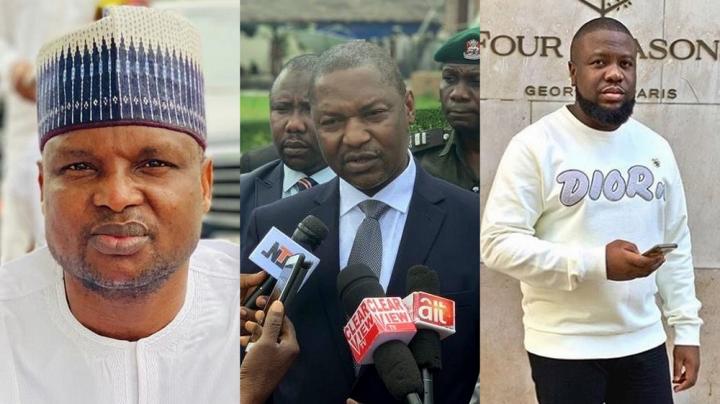 A staggering N4.2 billion has been reportedly traced to disgraced Commander of the Intelligence Response Team, DCP Abba Kyari; as well as his deputy, ACP Sunday Ubua.
This is according to Punch.
The monies were allegedly received by the police officers via their separate bank accounts.
The details are part of a report sent to the Attorney-General of the Federation, Abubakar Malami, by the NDLEA.
According to the drug enforcement agency, not less than N1.4bn passed through Kyari’s account while he was commander of the IRT.
However, Kyari’s deputy, Ubua, may have received far more than him as not less than N2.8bn was traced to his eight bank accounts.
According to investigations, Ubua allegedly received a lump sum of N2.664bn on August 15, 2019. The NDLEA is now working on the assumption that the sums traced to Kyari and his deputy may be connected to the sale of some illicit substances including Tramadol worth N3bn.
A source said, “You will recall that the NDLEA is investigating an allegation that Kyari and his team seized a large consignment of tramadol in a warehouse at Amuwo Odofin in Lagos. The consignment was worth about N3bn.
“The IRT under Kyari’s command seized these drugs and they are believed to have sold the consignment to a cartel afterwards. It was around the time of this seizure that Kyari’s deputy received a deposit of N2.664bn in his personal bank account. Out of this money, he purchased FBN Insurance shares worth about N100m.”
NDLEA seeks AGF’s approval to confiscate Kyari’s assets, bank accounts
Meanwhile, the NDLEA has written a letter to the AGF seeking his approval for the confiscation of properties and assets belonging to the once revered super cop.
It was gathered that the NDLEA’s request was dispatched to the justice minister last week following the March 7 arraignment of Kyari and his men for dealing in cocaine.
Kyari is facing eight counts of conspiracy, obstruction, and dealing in cocaine, and other related offences at the Federal High Court, Abuja.
The other defendants in the charge marked FHC/ABJ/57/2022, are four members of the IRT, Ubua, Bawa James, Simon Agirigba and John Nuhu.
Two other suspects arrested at the Akanu Ibiam International Airport in Enugu, Chibunna Patrick Umeibe and Emeka Alphonsus Ezenwanne, were also listed as defendants.
Kyari, has been indicted in the United States for alleged involvement in a $1.1m scam carried out by a notorious Internet scammer, Ramon Abass, a.ka. Hushpuppi was suspended by the police last July.
A source said the drug agency’s request is receiving the AGF’s attention, noting that Malami was in the process of approving the seizure of the embattled DCP’s assets and property to ensure he did not benefit from the proceeds of crime.
Our correspondent gathered that the ex-IRT commander’s assets that will be confiscated include cash and money in bank accounts, vehicles, real estate, notably hotels, residential and commercial buildings; personal effects such as wristwatches, jewellery and other valuable possessions.
The PUNCH learnt that the AGF’s approval was required by the NDLEA to seize a suspect’s property pending conviction by the court.
A senior officer stated, “Under the NDLEA Act, the NDLEA cannot forfeit his assets unless based on the consent of the Attorney-General. The NDLEA wrote last week and the AGF is considering the request.”
The NDLEA spokesman, Mr Femi Babafemi, confirmed the development, saying, “It’s a normal procedure to seek approval for a no debit order on suspects’ bank accounts when suspicious transactions are noticed in such accounts.”
Meanwhile, the Ministry of Justice has denied changing its legal opinion in respect of the money laundering case against Kyari, stating that the prima facie case against him still subsists.
The Director of Public Prosecution, Ministry of Justice, Mohammed Abubakar, said the AGF has not issued another opinion on the case, noting that the legal advice issued to the police in January still stands.
Abubakar told our correspondent on the phone on Sunday that the police were expected to probe the allegation but failed to carry out the necessary forensic analysis of the phones of the suspects which could have provided the money trail linking the senior police officer to Hushpuppi’s syndicate members.
He said, “You rightly quoted our first opinion where we said they (police) should establish the linkages- trace the money trail. We didn’t say the case file doesn’t contain sufficient evidence. It was their (police) response we were referring to. The prima facie evidence we said exists still exists.
“The response they sent to us after we sent in our opinion did not sufficiently address the issues we raised. That was the point we raised; maybe, we should have done it differently. We didn’t abrogate our opinion. Our legal opinion still subsists; you don’t seek for legal opinion twice.
“There is nowhere we said we changed our position. If you look very well, our position is the same as that of the Police Service Commission. When you have a case and you need further investigation and that further investigation is not conducted, you cannot go to court with half evidence.”
Speaking on the gaps in the police investigation, the DPP added, “Normally, they should have done the forensic analysis of the phone records of all the suspects and that would have given them an idea of how they dealt with the money, which sent the money, when they collected the money, what they did with it. They didn’t do all of these.”
Top Stories