Osinbajo Has Not Informed Buhari Of His Presidential Ambition - Laolu Akande


Akande in a WhatsApp message sent to AIT Correspondent, Yemi Adebayo on Monday said the report is not factual. 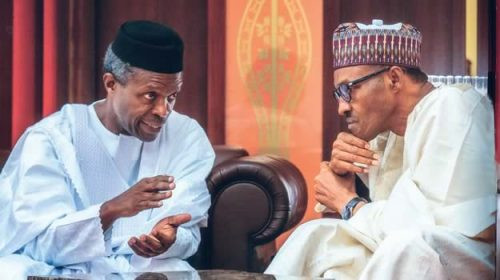 Reports that Vice president Yemi Osinbajo has told President Muhammadu Buhari about his 2023 presidential ambition has been debunked.
According to AIT, Osinbajo's media aide Laolu Akande said the report is mere speculation.
Akande in a WhatsApp message sent to AIT Correspondent, Yemi Adebayo on Monday said the report is not factual.
Some online media had reported that the vice president had informed the President of his Presidential ambition.
It claimed that credible sources close to the VP confirmed that Osinbajo told the president of his desire to take over from him at the expiration of his tenure in 2023 to consolidate the achievements they recorded since they took over from the opposition PDP in 2015.
As it stands, It is not clear whether or not the Vice President will throw his hat into the ring.
The office of the vice president had in a statement issued some months ago explained that The VP OSINBAJO will make his intentions known at the right time if he wants to contest the number one seat in the country.
Top Stories