The general overseer made the promise while speaking during a combined service at the Glory Dome in the Federal Capital Territory. 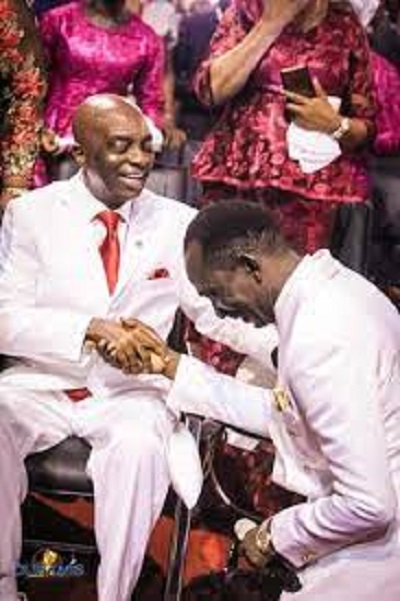 The founder of Dunamis International Gospel Centre, Pastor Paul Enenche has made a promise to the General Overseer of Living Faith Church Worldwide, Bishop David Oyedepo.
Enenche vowed to one day buy another aircraft for Oyedepo.
The general overseer made the promise while speaking during a combined service at the Glory Dome in the Federal Capital Territory, according to PM News.
The Dunamis head pastor noted that Oyedepo deserved another aircraft despite owning one.
He said; “I want to live a Kingdom-first lifestyle, start now! I want to be a major giver in the Kingdom, don’t wait! I believe that one day, I will buy my father in the Lord (Oyedepo), an aircraft.
“I’m trusting God for that, not that he can’t buy for himself, but this is just to add to what you have Sir, but before I reach that level, when he bought this current aircraft many years ago, I went to him with an offering; I said, “This is for aircraft’s tyre.”
The meaning of it is; if I had enough money to buy the aircraft, I could have bought it but, since I cannot buy it now, at least this money is equivalent to the tyre – plenty money because every part of the elephant is big.”
Top Stories