The suspects were arrested for breaking into people's properties and carting away their belongings. 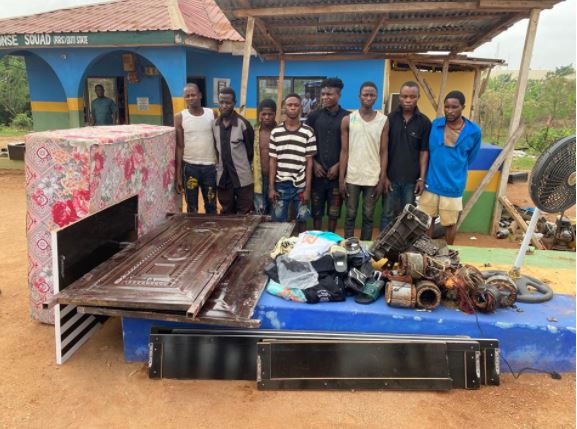 Operatives of the Ekiti police command have apprehended eight suspected members of burglary syndicates alleged to be behind the breaking of homes, schools, shops, and boutiques in Ado-Ekiti.

Spokesperson of the State Police Command, ASP Abutu, in a statement on Wednesday, said that a complainant came to the station and reported that his house around Omolayo Ajilosun, Ado-Ekiti was burgled by unknown hoodlums on March 5, in the middle of the night and carted away some of his properties.

The police stormed the hideout of the suspects and arrested three of them namely: Akinyemi Ojo, Akanle Olaniyi and Adewumi Ademola.

During interrogation, the suspects confessed to the commission of the crime and further led the operatives to where they kept the stolen items. Items recovered from them included one big mattress and a set of wooden bed.

On March 12, at about 4pm, the Command received a distress call that a group of suspected burglars was burgling a shop at No 92, Idemo Street, Ado-Ekiti.

The RRS operatives swung into action upon the receipt of the information, moved to the scene and arrested one Adebayo Jamiu. One standing fan and fourteen(14) generator coils were recovered from him at the scene.

During interrogation, Adebayo Jamiu confessed to the commission of the alleged crime and mentioned one Sunday Tomiwa as his accomplice who narrowly escaped from the scene on sighting the Police.

He also mentioned one Nwafor Ifeanyi as the usual receiver of the stolen items belonging to their victims. The suspects confessed further that they have burgled a lot of shops and schools within Ado-Ekiti.

In another case of burglary and stealing, a complainant came to the Station on March 12 at about 6pm and reported that his house behind NTA, Ado-Ekiti was burgled by unknown thieves.

The Police immediately activated an investigation into the incident for the possible arrest of the suspects and the recovery of the stolen items.

Based on intelligence gathering, the suspects were traced to Atikankan area of Ado-Ekiti and arrested while they were trying to sell the stolen items.

The arrested suspects, one Abdullahi Musa '35yrs' and Yaya Tasu '30yrs', confessed to the commission of the crime while two iron doors were recovered from them.

Similarly, on March 14 at about 05:30hrs, the Command received a distress call that unknown thieves were burgling a boutique opposite NNPC, Poly Road, Ado-Ekiti.

The Operatives immediately moved to the scene and on sighting the police, the hoodlums took to their heels. One Femi Dipo was arrested in the process while the other suspects escaped from the scene.

Dipo, during interrogation, confessed to the commission of the crime and further said that he has been a serial burglar alongside his other gang members who are currently at large.

Dipo narrated that he has been arrested and charged to Court on several occasions for the same offence.

Items recovered from him are: men and ladies wears and ten pairs of palm slippers.

The Command while declaring war against burglars and other criminal elements in the society, noted that the arrested suspects will be charged to Court for prosecution accordingly.