Residents said the sounds of the weapons the attackers came with frightened them as they ran into bushes out of fear of being hurt by stray bullets and weapons. 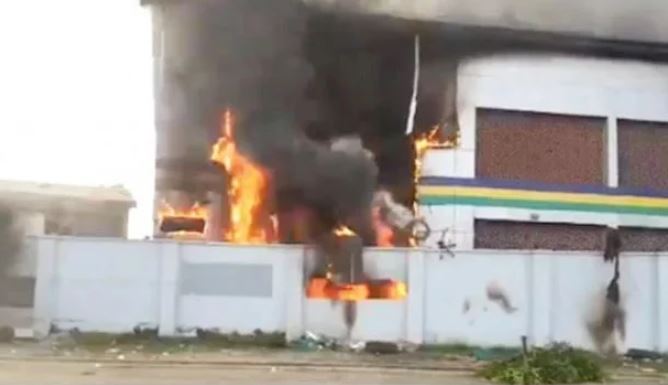 Some gunmen who are yet to be identified during the early hours of Saturday bombed the Umuguma Divisional Police Headquarters situated at the Owerri West Local Government Area of Imo state, according to The PUNCH.

The attackers also killed two police constabularies who were on duty.

It was learnt that on arrival, the gunmen who came with guns and Explosive Ordinance Disposals immediately opened fire at the divisional headquarters after blocking the roads leading in and out of the station, including the one close to the LGA council headquarters.

Residents of the area told our correspondent that the sounds of the weapons the attackers came with frightened them as they ran into bushes out of fear of being hurt by stray bullets and weapons.

A resident of the area, who does not want to be mentioned, said, “These guys are mean. On arrival, they blocked the roads, threw their dynamite into the police station and equally opened fire. They now waited to attack officers who ran out for safety.

“Unfortunately, two police constabularies by name Ifeanyi and Iyke were killed. Ifeanyi was from Umunkwo in Umuguma community here. He was a final year student at the Imo state University in Owerri. I knew him. It is just one year now he was recruited. He was trying to scale the fence when they used machete and cut him. He was sliced. The young man died on the spot. This is very unfortunate.

“The second victim, Iyke, was from Avu community. They shot him in one of his legs as he fled. He has been found dead now at a water stand where he possibly went to drink water. This is very unfortunate.”

Our correspondent gathered that it took the effort of fire fighters from Owerri to quench the inferno.

Another source said, “Fire fighters just quenched the fire now. The corpses of the two constabularies are here. They are about to evacuate them. This is very saddening. The entire place is in a state of fear and confusion as we didn’t sleep last night. The sounds of the guns and bombs were too frightening. The invasion was deadly.  We are in God’s hands in this state.”

The attack came few hours after the Assistant Inspector General of Police in charge of Zone 9 Umuahia, Isaac Akinmoyede, left the state after a one-day working visit.

The spokesperson for the police in the state, Micheal Abattam, had yet to respond to an inquiry concerning the attack.