The EFCC had flown Obiano to its headquarters in Abuja, where he would be grilled by detectives. 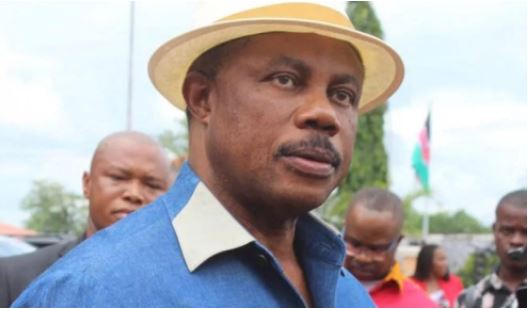 According to a report by Daily Trust, some fresh facts emerged on Friday that the immediate past governor of Anambra State, Willie Obiano, was being grilled by detectives of the Economic and Financial Crimes Commission over alleged mismanagement of N17billion Paris Club refund.

Although the EFCC insisted that it would not make Obiano’s offence public now because the case was still under investigation, multiple sources told Daily Trust that the former governor was also quizzed over how he spent security votes allocated to him for eight years and how some contracts were inflated.

The EFCC had flown Obiano to its headquarters in Abuja, where he would be grilled by detectives.

He would spend his first weekend after leaving power in the EFCC cell.

Obiano will also be grilled by detectives over alleged misappropriation of public funds, including N5bn Sure-P and N37bn security vote which was withdrawn in cash.

It was gathered that part of the funds were also allegedly diverted to finance political activities in the state.

The ex-governor was picked up at about 8:30pm on Thursday, hours after he handed over power to his successor, Charles Soludo.

Obiano was on his way to the United States when he was intercepted at the Murtala Muhammed International Airport, Ikeja, and whisked away to the Lagos office of the commission.

Speaking with PUNCH, the EFCC spokesperson, Wilson Uwujaren, confirmed the ex-governor’s transfer, saying, “Obiano has been flown to Abuja this morning (Friday). He is currently at our Abuja office.

“Obiano was arrested for alleged misappropriation of public funds, including, N5bn Sure-P and N37billion security vote which was withdrawn in cash. Part of the funds was also allegedly diverted to finance political activities in the state.”

Uwujaru, however, declined to speak on when the suspect would be released on bail.

The agency had last year placed the former governor on its watch list and also asked the Nigeria Immigration Service to stop him from leaving the country in a letter to the Comptroller-General of Immigration dated November 15, 2021.