The massacre, though not the first of its kind in the area, appears to be the most deadly as no member of the vigilante group who went after the bandits escaped to tell the story of what transpired. 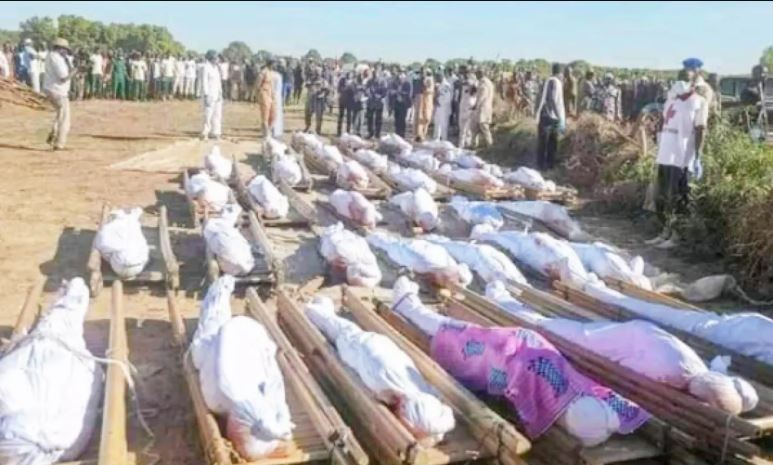 It was serious tragedy that struck recently at the Zuru Emirate of Kebbi State in the wee hours of last Monday following the massacre of 65 members of a vigilante group, otherwise refer as ’Yan-Sa-Kai, by bandits, who laid siege on the way to their dens, according to Daily Trust.

The massacre, though not the first of its kind in the area, appears to be the most deadly as no member of the vigilante group who went after the bandits escaped to tell the story of what transpired at Makuku village of Danko/Wasagu Local Government Area.

Members of the ’Yan-Sa-Kai who went for the operation that led to their deaths were not only drawn from communities in Zuru Emirate but also from Magajia and Danrangi communities in Rijau Local Government Area of Niger State.

Villagers who spoke with Daily Trust Saturday lamented the activities of informants to the bandits, which they said exposed members of ’Yan-Sa-Kai to great danger, such as the latest attack.

As if the attack on the members of ’Yan-Sa-Kai was not enough, the bandits opened fire on a troop from 232 Tank Battalion, Zuru in Kanya town, leading to the death of officers and men of the Nigerian Army.

The Kebbi State deputy governor, Colonel Samaila Yombe (retd), was part of the troop that was brought under fire by the bandits. He was in the area to assess the level of execution of the troop’s assignment.

Sources said a fierce exchange of fire took place at the outskirts of Kanya town between troops and the bandits, and casualties were recorded from both sides.

Although there is no official statement from the government on the number of casualties recorded, a source revealed that the deputy governor lost his convoy commander, ASP Idris Libata.

The state government, through its secretary, Umar Babale Yauri, could not give the number of soldiers who died. He, however, confirmed that some military officers died during the Kanya gun duel.

Daily Trust Saturday learnt that activities of bandits increased in the area following an intensified military action in Niger and Zamfara states, which Kebbi shares boundary with.

Zuru Emirate is vulnerable because of the topography of the area as it is surrounded with mountains and thick forest, which can easily serve as hideout for criminals.

A member of the vigilante group from the emirate who asked for anonymity for the fear of possible attack, said they were thrown into mourning as a result of the loss of their members. He said the men were in high spirits when they set out for the operation.

He said those who went for the mission were some of the bravest warriors of the land who had commanded various successful battles against the bandits.

Kopto Dunku was the commander of the ’Yan-Sa-Kai and one of the most respected members of the group who was respected for his bravery and selfless service to the community. He was a source of inspiration to many, especially the youth. Majority of them joined the group because they wanted to take after him.

“I am assuring you that their deaths will not deter us from defending our ancestral land. We will ensure that their blood did not flow for nothing.  The manner they exited the world is painful.

“Yes, the issue of the activities of informants is there, but I am assuring you again that whoever had a hand in the gruesome murder of our members will pay dearly for it. We are mourning now, but their blood will not go for nothing. We are more determined now than before to defend our land,” he said.

Also speaking to Daily Trust Saturday, the Kebbi State deputy governor, Col Yombe, debunked the rumour that he was abducted while in the company of the army from 232 Tank Battalion, Zuru.

He also said that in order to avoid collateral damage that could involve civilians, the troop maneuvered to pull out of the town and take out the bandits. It was in this process that both sides recorded casualties.

The deputy governor commended the troop for bravery and professionalism.

“I joined the unit of soldiers who were escorting their commanding officer in order to visit the troops at the frontline. I had to go for what they call militarily battlefield tour as this would enable me to see how they are executing the mission.

“For a bandit to hold me captive is not even in the dream. There was nothing close to that. This is a big joke. It is frivolous. I am at home, and as you can see, I am hale and hearty. I am free like a bird.

“What happened in Kanya was that the bandits have mixed up with inhabitants in such a way that it is difficult to fight them without recording a collateral damage. I advised the commanding officer to pull out of the town so as to pull them along and separate them from the inhabitants.

“In the process, of course, in a battle situation like this, there is bound to be casualties. Honestly, they had more casualties than us. From my point of view, I must say I doff my cap to the 232Tank Battalion, Zuru. They proved themselves creditably. The soldiers were few, but from their gunshots, one could assess that there were about 150 to 200 bandits,” he said.

When contacted, the spokesperson of the Kebbi State police command, DSP Nafiu Abubakar, did not pick his calls, neither did he reply a text message sent to him.