A Lagos State police officer who was caught in a viral video demanding for tinted glass permit is currently undergoing trial. 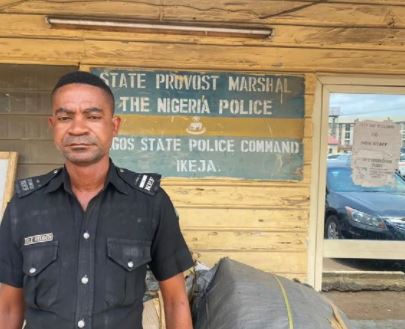 Dele Reuben
A police officer, Dele Reuben has been arrested and is currently undergoing disciplinary procedures for going against the order of the Inspector General of Police, Alkali Baba Usman to demand for tinted glass permit from a motorist.
Here's an update by the Lagos police:
The Lagos State Police Command wishes to inform the general public that Inspector Dele Reuben, the officer captured on video harassing a motorist for the now-suspended tinted glasses permit, has been apprehended and is currently undergoing disciplinary procedures at the State Headquarters, Ikeja.
His arrest came on the heels of the directive of the Lagos State Commissioner of Police, CP Abiodun Alabi, fdc, mnim, psc that the errant officer be identified, arrested and decisively dealt with.
It is pertinent to reiterate that issuance of tinted glasses permit remains suspended by the Force Management to enable an upgrade of the tinted glasses permit portal. In effect, while all existing tinted glasses permit remain valid, issuance of new permits is yet to resume.
CP Alabi has further reiterated to his officer and men his zero tolerance for harassment, extortion and abuse of rights of citizens. He equally assured the general public that the Lagos State Police Command under his watch will continually strengthen its internal disciplinary mechanisms.
SP BENJAMIN HUNDEYIN, anipr, mipra,
POLICE PUBLIC RELATIONS OFFICER
LAGOS STATE COMMAND
IKEJA
Top Stories