Russia said it will "radically" reduce its military activity in northern Ukraine, including near the capital Kyiv. 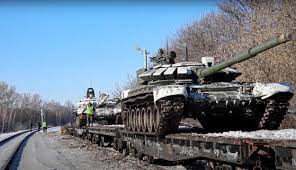 Russia has announced plans to partially withdraw its soldiers from Ukraine.
Russia said it will "radically" reduce its military activity in northern Ukraine, including near the capital Kyiv, after "meaningful" talks in Istanbul, Moscow's negotiators said Tuesday.
"Given that the talks on the preparation of an agreement on the neutrality and non-nuclear status of Ukraine have moved into a practical field... a decision has been made to radically, by several times reduce the military activity in the areas of Kyiv and Chernigiv," Russia's deputy defence minister Alexander Fomin said.
AFP reported that Chief negotiator Vladimir Medinsky said there had been a "meaningful discussion" at the talks and that Ukrainian proposals would be put to Russian President Vladimir Putin.
Top Stories