Porsha, who is also an Author, arrived in Nigeria's commercial capital without Simon having any advance knowledge of his fiancee's visit. 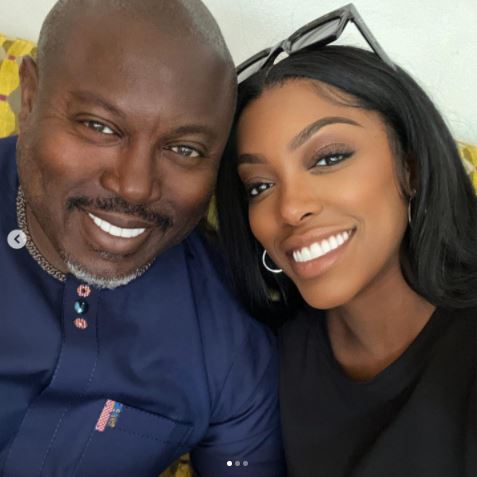 Porsha, who is also an Author, arrived in Nigeria's commercial capital without Simon having any advance knowledge of his fiancee's visit.

In a heartwarming video posted on her Instagram page on Saturday April 2, 2022, an excited "The Real Housewives of Atlanta" alum was seen coming off a vehicle and waited in front of a building hoping to catch Simon by surprise.

On coming out of the building, the businessman was pleasantly shocked to see his partner as they both hugged each other affectionately.

In the caption accompanying her Instagram post, Porsha said she had to hop on an 11 hour flight to see her lover because she had missed him.

She added that she wanted to bring some extra sunshine to Simon's life because of the stress he went through lately from his back and forth journey to Benin and Lagos to visit his mother.

She wrote "SURPRISE Shawty!!!! I Pulled up on Bae in Lagos, Nigeria and he was so shocked. Actually he’s still in shock that i hopped up on that 11 hour flight to see that ass!!” she wrote in the caption of the post.

Porsha went on to add, “I missed my baby and plus he had been back and forth Benin & Las visiting his Mother so I wanted to bring some extra sunshine.

She concluded with several hashtags that read “pull up baby,” “April Fool’s was lit,” and “crazy in love.”

Simon is a Nigerian entrepreneur and founder of SIMCOL Petroleum Limited Company, a supply and distribution company.

He is also into film production working alongside Academy Award winner, Spike Lee, to executive produce the 2020 movie titled "of the South."

Simon has five children from his previous three marriages and will become stepfather to Porsha's two-year-old daughter when the duo eventually get married.

White Woman Seeks To Learn Nigerian Culture, Says She Wants To Make Her Nigerian Lover The Happiest Man On Earth