FULL LIST: Check Out The Charges That Were Dropped In Nnamdi Kanu’s Trial


Justice Binta Nyako, in a ruling, held that the removed charges did not disclose any offence against the defendant. 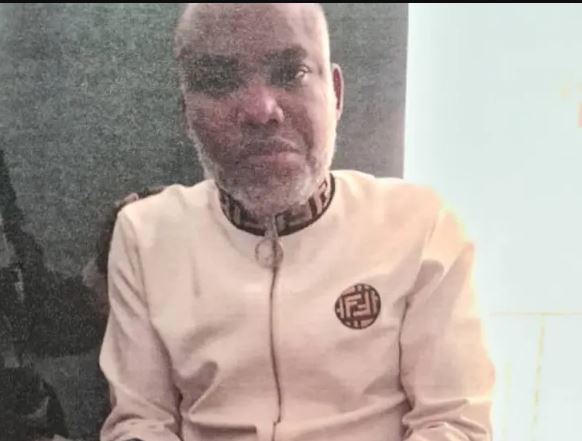 It will be recalled that a Federal High Court in Abuja on Friday struck out eight of the 15 count charges against the leader of the Indigenous People of Biafra (IPOB), Nnamdi Kanu.

Justice Binta Nyako, in a ruling, held that the removed charges did not disclose any offence against the defendant.

While ruling on the preliminary objection seeking to quash the charges, the judge said counts 6, 7, 8, 9, 10, 11, 12, and 14 have not disclosed any offence against the defendant.

Daily Trust has compiled the charges that were struck out below:

Count 6: Made broadcasts to attack officers of the Nigeria Police Force

Count 7: Made broadcasts in which he incited members of the public to hunt and attack officers of the Nigerian Police Force

Court 8: Made broadcasts in which he directed members of the IPOB to manufacture bombs.

Court 9: Made broadcasts on diverse dates in furtherance of terrorism against the Nigeria state and with intent to destabilise the fundamental political and economic structures of Nigeria, incited members of the public to stop the Anambra governorship election.

Count 10: Incited members of the public to destroy public facilities.

Count 12: Made broadcasts with the intention to incite members of the public to stage a violent revolution in furtherance of acts of terrorism.

Count 14: Directed members of the public to destroy the public transport system in Lagos, resulting in major economic loss to the governor

The counts are as follows:

Count 1: That sometime in 2021 made a broadcast to intimidate the population and threatened that people will die, the whole world will stand still and thereby committed an offence under Sec 1(2)(b) of Terrorism Prevention Act, 2013

Count 2: Made a broadcast sometime in 2021 to intimidate, issued a deadly threat that anyone who flouted your sit-at-home order should write his or her will as a result banks, schools, markets, shopping malls, fuel stations domiciled in the Eastern states of Nigeria were not opened for business.

Count 3: On diverse dates between 2018 and 2021, professed himself to be a member of the IPOB, a proscribed organization in Nigeria.

Count 4: On diverse dates between 2018 and 2021 made broadcasts in furtherance of an act of terrorism by inciting members of the public to hunt and kill Nigerian security personnel.

Count 5: Between 2018 and 2021 made a broadcast in which he incited members of the public to hunt and kill families of members of Nigerian security personnel.

Count 13: Between 2018 and 2021 you directed members of the public to burn down public facilities in Lagos resulting in major economic loss to the FG

Count 15: Between March and April 2015 imported into Nigeria a radio transmitter known as TRAM 50L concealed in a container of used household items and violated Section 47(2)(a) of criminal code act cap c45 LFN 2004