The popular Nigerian actress accused Falegan of being lazy and not being able to take care of himself. 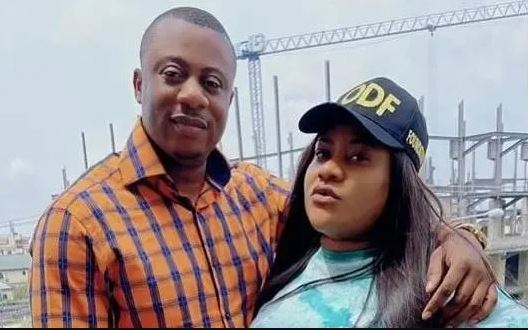 Nkechi Blessing, the popular actress, has said she was never married to Opeyemi Falegan. In a series of outbursts on social media, the actress accused him of being lazy and not being able to take care of himself. This was even as Falegan made several accusations of his own.

In an interview with Saturday Beats, Blessing said, “I was never married to Falegan. We just had a relationship that I thought was a beautiful one that needed not to be defined by a wedding. However, since it did not work, everybody just moved ahead.”

On what caused their break up, she said, “Nothing caused it. It did not just work. We just went our separate ways. It was a fact that I was the one taking care of him. Everyone that lives in London knows that.”

However, many have lambasted the actress for the ongoing messy social media drama, considering she had said just weeks ago that she would not drag her partner on social media if the relationship ended.

In the wake of the divorce between dancer, Korra Obidi, and her husband, Justin Dean, Blessing wrote on social media, “I have said this before and I will say it again. I will show you fun memories of my relationship and if that relationship goes south, I will take my ‘L’ in peace and move on.

“I resist the urge to shalaye (explain) because I cannot come and be dragging someone who I once used sweet words to praise on this app. Let’s carry our madness to WhatsApp.”

Meanwhile, Falegan has apolgised for his outbursts. In a video posted on Instagram on Thursday, he said, “I want to apologise for my outburst yesterday. I want to tell everybody that I will be leaving social media till further notice. When love comes, it is always like a dream but when it goes, it is like a nightmare.”

In an Instagram Live session with cross dresser, James Brown, and two other participants, the actress announced that she was presently dating a 60-year-old man.

She said, “I am dating a 60-year-old man now and he gives me so much peace. He does not have time for Instagram. I am the one sharing all these scandals to him.”