According to the boy's mother, her son has declined the invitation and said he does not want to see the footballer. 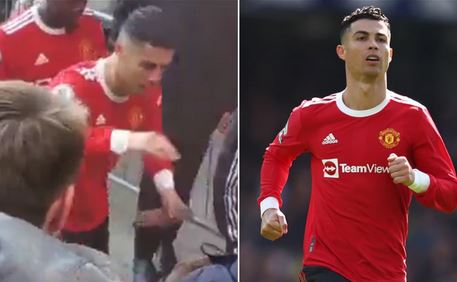 The 14-year-old autistic boy who was allegedly bruised by footballer, Cristiano Ronaldo at Goodison Park has turned down the Manchester United star's invitation to Old Trafford.

Sarah Kelly, from Wirral, took her 14-year-old son Jake Harding to Goodison Park on Saturday for his first match. The pair sat in the Park End to watch Everton beat Manchester United 1-0.

Jake, who has autism, was filming the Manchester United players leaving the pitch at full-time when Ronaldo swiped a mobile phone out of his hand.

Sarah told the Liverpool Echo that the phone belonged to Jake and claimed that the Portuguese striker 'assaulted' him, bruising his hand, by knocking the phone to the floor.

Merseyside Police confirmed on Saturday that it was investigating reports that a boy had been allegedly assaulted by an away player.

Sarah said on Monday that she has been contacted by Manchester United but has been unimpressed by the club and Ronaldo's public response. Regarding the response from Manchester United, Sarah told the Echo: 'United have handled it terribly and it's just made things even worse to be honest.'

In reply to Ronaldo's invitation to Old Trafford and his apology, Sarah said: 'The way I see it is, if someone assaulted him in the street and then asked us to go around for dinner, we wouldn't.

'Just because he's Cristiano Ronaldo, why would we do it? It's like we owe him a favour, but I'm sorry, we don't.'

'They're not my words, they're my son's words. At the end of the day, this is what it's about.

A spokesperson for Manchester United confirmed that the club will cooperate with the FA and the police's inquiries. Additionally, Ronaldo took to Instagram on Saturday night to apologise for his 'outburst'.

He said: 'It's never easy to deal with emotions in difficult moments such as the one we are facing. Nevertheless, we always have to be respectful, patient and set the example for all the youngsters who love the beautiful game.

'I would like to apologize for my outburst and, if possible, I would like to invite this supporter to watch a game at Old Trafford as a sign of fair-play and sportsmanship.'