With four of his children hacked down by gunmen who invaded Kukawa village, Kanam Local Government area of Plateau State on Sunday morning, Ali remains inconsolable. 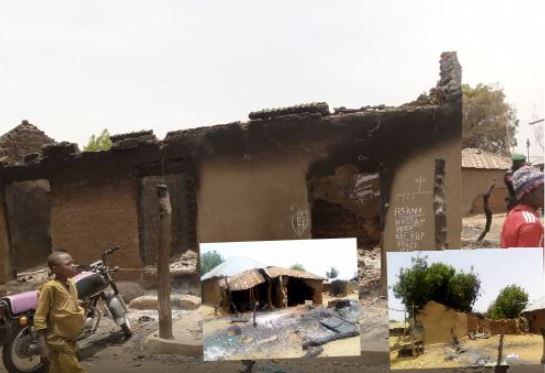 Nigerian man, Anya Ali has almost cried his eyes out because of his deep anguish and pain, The Nation reports.

With four of his children hacked down by gunmen who invaded Kukawa village, Kanam Local Government area of Plateau State on Sunday morning, he remains inconsolable.

Six other relations of his were also killed in the massacre which left about 106 residents of 10 communities in Kanam and Wase Local Government areas dead. About 70 others were injured while 100 houses were razed.

Perhaps more devastating to Ali is the gory sight of the stream of blood resulting from the attack and the mass burial of the victims.

“I am yet to recover from the gory sight of this attack. It is painful to see my loved ones being lowered into a mass grave,” he said, shaking his head and biting his lips.

“Some were butchered like goats. Their blood was everywhere…” he cried.

Isamail Isa, another resident of Kukawa, escaped death by a whisker. But lost to the attack were his cousin and houses belonging to his relations.

His house is now like a refugee camp, offering accommodation to about 20 villagers who were rendered homeless by the invaders.

Six days after the attack, much of the state was yet to recover from the shock yesterday.

He vowed to improve security at the state’s  borders, following incessant attacks in some communities in Kanam, Wase and Bassa local government areas .

The governor spoke during an interactive session with key stakeholders and community members of Kanam Local Government Area in Dengi.

Efforts, he said, were being made to deploy security agencies to forestall further attacks in the area.

“Kanam shares border with Taraba and Bauchi states and there is a need to address its porous nature through improved security at the borders,” he said.

He added: “The decision to improve security at the borders is not only exclusive to Plateau but a resolution by the Northern Governors’ Forum to address insecurity in the region.

“We will do all our best because it is our primary responsibility to protect lives.

“Those who committed this heinous crime may think that they have escaped, but I can assure you that we will never allow them to go free, no matter how long it takes.

“I am sure that God will also not allow them to go unpunished for taking the precious lives of others without reason.”

“I came here with a heavy heart and with all heads of security agencies to comfort you.”

He urged the people not to take the law into their hands through reprisals, but cooperate with security agencies by giving them information that would to enable them to discharge their duties effectively.

The governor assured the people that the state was working with the Federal Government to find a lasting solution to insecurity on the Plateau, the North Central and the entire North.

He said he had already briefed President Muhammadu Buhari and appealed for a coordinated approach to tackling terrorists’ attacks in the North Central, particularly at border areas and ungoverned spaces which have become operational bases for the terrorists who criss-cross communities, causing damage to lives and property.

Kanam LG Chairman,  Dayyabu Garga, said 106 people were buried in the aftermath of the attack.

He said that the area was becoming a hideout for bandits and the development was affecting the source of livelihood of his people who are mostly peasant farmers.

Garga called for deployment of more security personnel in the area to protect lives and appealed for the provision of relief materials.

Also speaking at the interface, the President of Jhar Development Association, Mr Amos Gizo, called for construction of access roads in the area to facilitate quick response to distress calls.

The News Agency of Nigeria (NAN) reports that the governor earlier paid a courtesy visit to the Emir of Kanam, Alhaji Mu’azu Muhammad II, and also visited the injured at Dengi General Hospital.

Rep: Nigerians should be allowed to carry arms for self defence

Speaking to reporters after visiting the scenes of the attacks yesterday, Gagdi asked the National Assembly to enact laws permitting Nigerians to bear arms for the purpose of defending themselves.

Gagdi, who is the House Committee Chairman on Navy, said legalising arms bearing would go a long way in addressing the recurring attacks and killings in some parts of the country.

His words: ”If we want to curtail the spate of attacks, we should make laws that will permit citizens to carry arms.

”If, for instance, those who attacked my people knew that the locals also had arms, they would not have come; and even if they came, the casualties would not be this high.

“But there must be regulation of the use of the arms. Anyone who misuses it should be imprisoned or even sentenced to death by hanging.

”But I tell you, if citizens are allowed to carry arms to protect themselves, all these attacks and killings will end.”

How it all started, by Kanam LG chair

Giving a vivid account of the coordinated attack, Garga said that early in the morning of Sunday, about 210 armed bandits stormed Kukawa, Gyambau, Kyaram, Dungur and Shuwaka on motorcycles. There were about 70 motorcycles each of which carried three persons.

Thirty-six people were killed in Kukawa, 24 in Jambau, eight in Kyaram and 10 in Wanka.

Some other people were killed in the bush.

Survivors, however, disputed the casualty figure given by the council chairman. A member of the vigilance group in the LGA, Salisu Musa, said no fewer than 250 people were killed.

“The people killed could not have been fewer than 250. I participated in the rescue operation and we collected more than 200 bodies by the time I got tired and withdrew,” he said.

Ismail Isa said the attack lasted about five hours, from 10 am to 3 pm, when security agents got to the scene and the bandits fled.

The gunmen were shooting and cutting down people with machetes all at the same time, he said.

“Those who were running were shot down and then butchered with machetes. Houses, shops and foodstuffs were set on fire. We don’t know what we have done.

“They moved from one village to the other.

“I cannot tell how I escaped the attack. They came when we were sitting under a tree. Some of the people we sat with were killed.

“I lost four people from my house and my house was burnt down completely with everything I had. I don’t know from where I will start life afresh.”

The invaders, according to Garga, came from Kamabari Forest in neighbouring Taraba State and said they had to be smoked out by all means.

He said: “We must flush them out of the forest. They want to turn the forest into another  Sambisa. If they are not flushed out, we will not be safe.”

The Emir of Kanam, Alhaji Muhammad Muazu Muhammad II, expressed regret over the incident that claimed the lives of his people and called for the adoption of more proactive measures in the security operations of the country.