Obinna Oke decried the level of insecurity in the country as he revealed that some terrorists are recruited into the army. 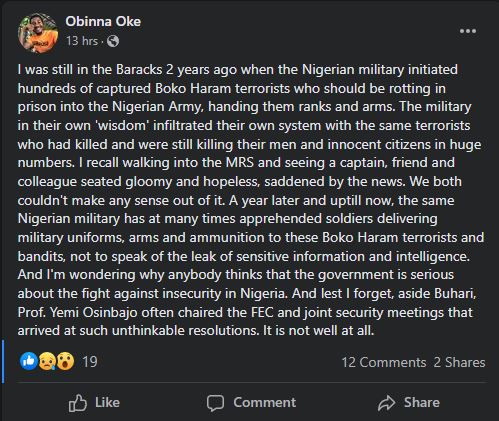 A Nigerian doctor has raised alarm over the handling of insecurity in Nigeria.
Obinna Oke decried the level of insecurity in the country as he revealed that some terrorists are recruited into the army.
In a Facebook post, he revealed that the reason the military is losing the war against insecurity is as a result of the unethical decision of the government to recruit terrorists into the army.
He wrote:
I was still in the Baracks 2 years ago when the Nigerian military initiated hundreds of captured Boko Haram terrorists who should be rotting in prison into the Nigerian Army, handing them ranks and arms. The military in their own 'wisdom' infiltrated their own system with the same terrorists who had killed and were still killing their men and innocent citizens in huge numbers. I recall walking into the MRS and seeing a captain, friend and colleague seated gloomy and hopeless, saddened by the news. We both couldn't make any sense out of it. A year later and uptill now, the same Nigerian military has at many times apprehended soldiers delivering military uniforms, arms and ammunition to these Boko Haram terrorists and bandits, not to speak of the leak of sensitive information and intelligence. And I'm wondering why anybody thinks that the government is serious about the fight against insecurity in Nigeria. And lest I forget, aside Buhari, Prof. Yemi Osinbajo often chaired the FEC and joint security meetings that arrived at such unthinkable resolutions. It is not well at all.