The victims were abducted by armed robbers while travelling to Ilesa to deliver some products before they were rescued by the officials. 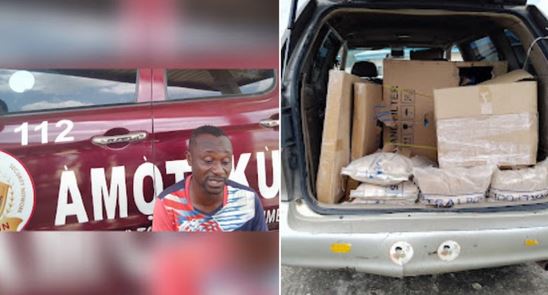 According to information made available by Amitolu Shittu, the Field Commander of Osun Amotekun, the victims, Bakare Ibraheem and Eric Esoha were attacked and abducted by armed robbers while traveling to Ilesa to deliver some products.

According to Shittu, “The hoodlums stopped the vehicle around 12:15 am and ordered the driver and the person sitting beside him to alight from the vehicle. The driver tried to escape from the scene, but they got him and cut him with a machete and stabbed him.

“Our men responded to a distress call, gave the criminals a chase to their den where the victims were rescued but their abductors fled from the scene.

“The rescue operation was carried out by Amotekun personnel attached to Ife. Right now, they are on the trail of the armed robbers and we assure that they would be apprehended.”

The Field Commander explained that the agency decided to go after the armed robbers in order to reassure the residents of the State that the outfit would stop at nothing in ensuring that criminals were chased away from the State.