Marriage Is Only For Well Trained Women. If You Are Too Big To Respect A Man Stay Single – Nigerian Man Warns


According to him, a lady who feels too big to respect her husband should remain single, in his opinion. 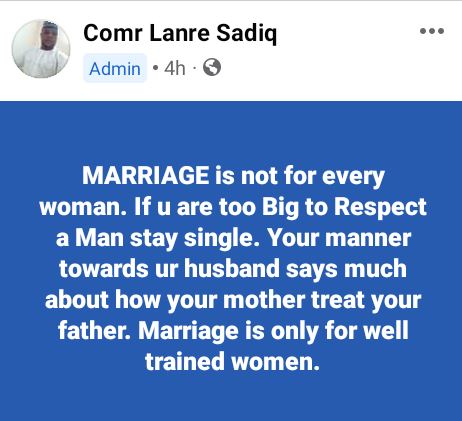 A Nigerian man has stirred controversy online after he stated that marriage is for only well-trained women.

The man, Identified as comrade Lanre Sadiq, revealed this on his Facebook page.

According to him, a woman’s manner toward her husband says much about how the woman’s mother treats her father and that a lady who feels too big to respect her husband should remain single, in his opinion.

“MARRIAGE is not for every woman. If u are too Big to Respect a Man stay single. Your manner towards ur husband says much about how your mother treat your father. Marriage is only for well trained women.”