The Police recovered two locally made cut to size guns and four live cartridges from the suspects. 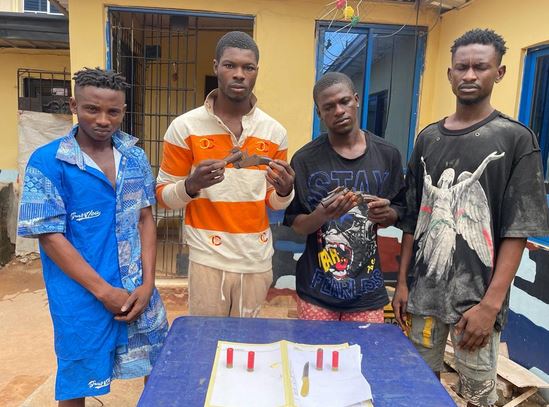 Four suspected cultists and armed robbers have been apprehended by men of the Delta State Police Command d’Anti-Cult Unit in Issele-Azagba.

The Police also recovered two locally made cut to size guns and four live cartridges from the suspects.

The suspects were arrested in their hideout by the Police.

He said, “information got to the Command that a group of suspected cultists/armed robbers were hibernating at Eloke Hotel located in Issele Azagba and the location being their meeting point before carrying out their operations.

“Intelligence further revealed that the syndicate monitor to know if the police are closing in on them and that whenever they suspect anything, they throw their guns from the window of the hotel and run away”.