Man Who Collected Car Gift From Ponzi Scammer, Ovaioza to Return It (Photo)


Victor Daniel took to his Facebook page to pen a long note, revealing all he knows about the lady and how he got to become her friend. 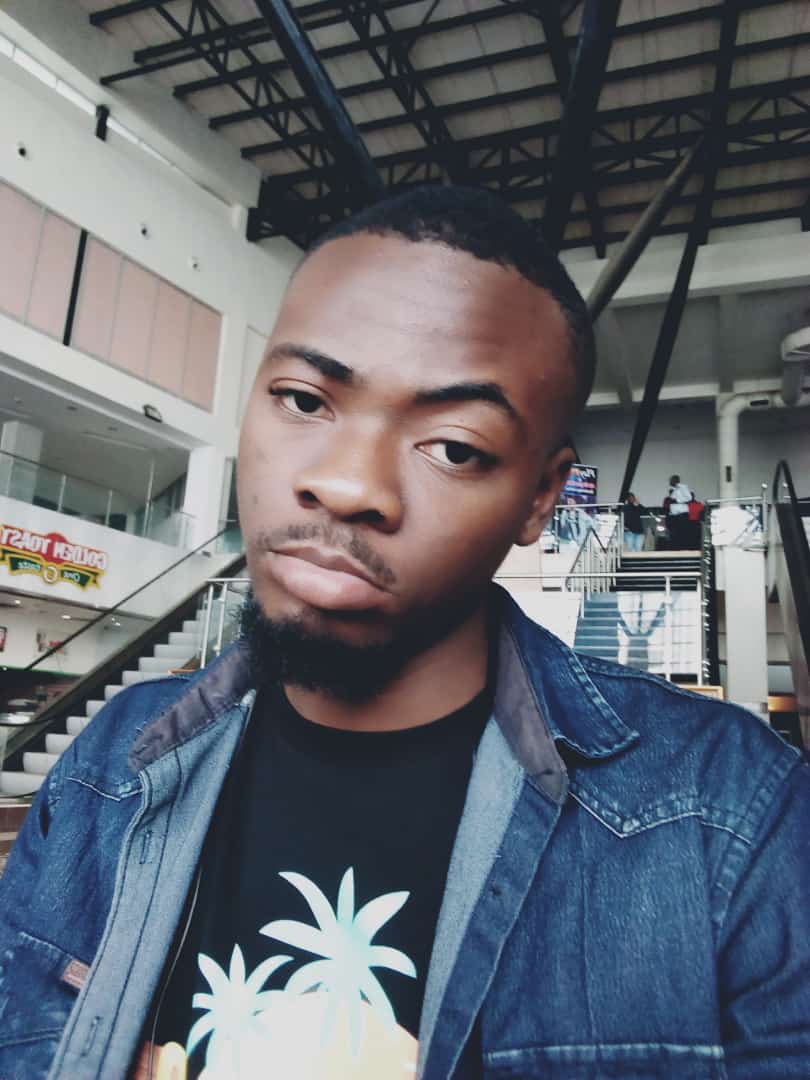 A friend of alleged ponzi scammer, Ovaioza has apologized to investors while pledging to return the car the lady gave him as a gift.
Victor Daniel took to his Facebook page to pen a long note, revealing all he knows about the lady and how he got to become her friend.
He expressed empathy over the anguish suffered by investors who invested in the woman's business but were scammed.
He also asked for forgiveness over the role he played in promoting the business which later turned out to be a ponzi.
Daniel wrote:
I don't know how the tone of the post may come across, but this is the most sincere I can be. I've made a conscious effort not to make this poetic or flowery or sensational because that would be mechanical and insulting to the people who have lost their monies.
I hope not to sound defeatist—like my whole world is crumbling to the ground, because it isn't. Whatever humiliation I've experienced from this is nothing compared to the livelihoods lost to a scheme I myself fell for.
I was friends with a scammer and unwittingly contributed to the laundering of her image. I have thought about what I could have done differently from the beginning but I don't know. This isn't one of those simple missteps that you could have undone if you were just a little more careful.
We were friends, and all I ever did was becoming friends with someone who sought out that friendship. Someone that I had something in common (language) with. There was no reason not to be.
We became friends the second time we ever met—the first time at the 2019 hangout—when she visited my family house with her fiance (turned husband) and met my aunt. We spoke the same language so it was very convenient. She fronted as a businesswoman who had a "verifiable" footprint.
So when, some months later, she called to ask if I was willing to accept a car gift, I was ecstatic. Not like I'd done anything spectacular to deserve this type of gift but I was grateful. It was my own little miracle. I spoke to my family and close friends about it, everything made sense and that was it.
I've been friends with her for a while now, up until the aftermath of that meeting. I was friends with her, rooted for her, believed her, and wanted so bad for all of us her friends to be right about her and everyone else wrong. I've never wanted anything more in my life than to be proven right at the end of the day; that everything was just a big misunderstanding.
I've never been personally involved with her business. I've never done any service for her outside the duties of friendship. I have never been privy to the inner workings of her business or finances. When the rumours started I had people text me to know if it was true and it was funny that they expected me to know.
Because  I didn't.
She was a good friend to me, and she was someone I cared about. I still have the video of her wedding up on my timeline because it was a special day for her and I shared in that joy. Even at this moment, through the hurt of betrayal and the attendant humiliation that has come with it, I still feel a warped sense of sympathy to see her fate wrap up like this.
But I also understand the place of justice and restitution. That's why I cannot in good conscience, drive around in a car bought with people's toil. I'm returning the car as soon as I can establish a proper channel through which it can be added to her properties listed for liquidation.
Returning this gift isn't an attempt to save face, because it doesn't. It in fact opens me to more public ridicule. But I know it is the right thing to do for myself because I cannot have a gift that heavy rest on my conscience. I'm not exactly a model of integrity but I would never have put myself in such proximity to receive this sort of gift from a fraudulent person. (I have given you no reason to believe this, so it's OK if you don't.)
I'm pretty chill about all the humiliation myself and her other friends have experienced throughout this phase. I believe in consequences and I like to experience them because it's the only way I can live with myself after I've done stup!d things.
Honestly, I don't mind how many times my pictures are shared. I don't mind the hit I'm taking on my "credibility" (tbh it's flattering that I was considered to have any). This is the price I have to pay for bad association and I'm fine with it, and will bear it for as long as I have to. Because at the end of the day I'm going to pick up from where I stopped and will remain Victor Daniel. Same guy.
For now? Roast the hell out of me. Give me all the smoke. I want no pity. All that energy should go to the people who truly deserve it, the victims of the most devastating scam ever executed on Facebook. 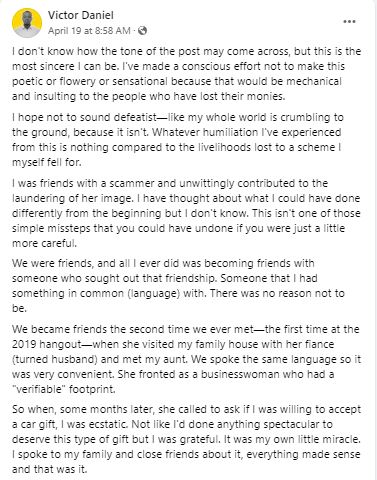 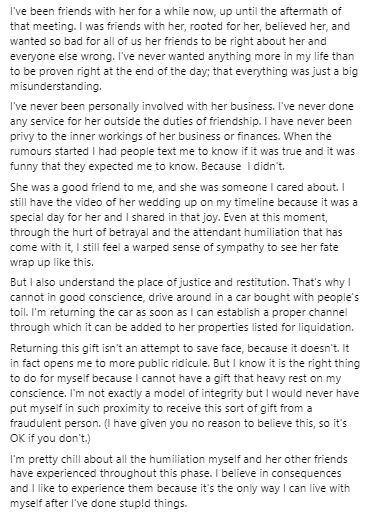 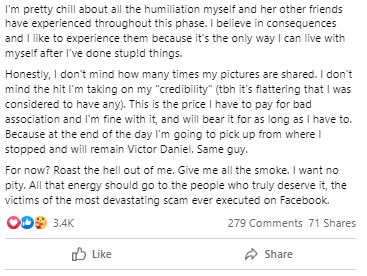