2023: Aisha Buhari Under Fire For Inviting Tinubu, Osinbajo, Wike, Others For Dinner


Aisha, who recently returned from her base in Dubai, United Arab Emirates, had invited all the presidential aspirants to an Iftar dinner at the Presidential Villa. 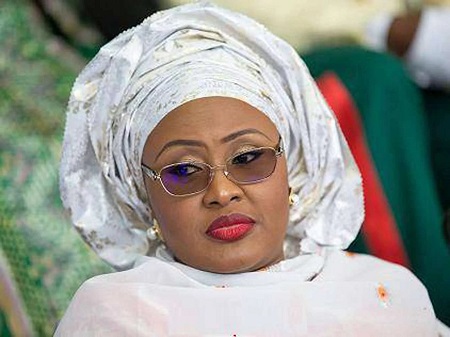 Nigerians have lambasted First Lady, Aisha Buhari over a controversial dinner invitation she extended to all presidential aspirants ahead of the 2023 presidential election.
One of her critics, Reno Omokri, a socio-political commentator argued that Aisha lacked moral or constitutional authority to summon anyone.
Recall that she recently returned from her base in Dubai, United Arab Emirates before issuing the invitation.
Those invited include: Vice President Yemi Osinbajo, Alhaji Atiku Abubakar, Governor Nyesom Wike, Governor Yahaya Bello, Peter Obi, Adewole Adebayo, Bukola Saraki, Bala Mohammed, Aminu Tambuwal, Chibuike Amaechi, Bola Ahmed Tinubu, among others.
The event will be held on Saturday.
The aspirants were asked not to attend the dinner with their mobile devices and that their invitation cards would serve as their entry pass.
The Special Assistant to the President on Media and Publicity, Office of the First Lady, Aliyu Abdullah, clarified that it is a standard protocol for guests at events in the President Villa to be requested not to go in with phones.
Reacting, Omokri, in a series of tweets via his Twitter handle, on Thursday night, said any presidential aspirant that accepts Aisha’s summon is not a man and should not be voted for.
He tweeted: “I don’t know about other aspirants, but I can assure Nigerians that Atiku Abubakar will never attend this event, or any other summons disguised as an invite by Aisha Buhari. Imagine the audacity! Phones are not allowed? Is Aisha herself allowed? Tufiakwa! Nonsense!
“Any Presidential aspirant that accepts this summons by Aisha Buhari, disguised as an invitation, is not a man and should not be voted for. Aisha lacks moral or constitutional authority to summon anyone. A woman whose husband described as belonging to his other room?”
Top Stories