The fire which broke out on Friday morning was as a result of a 45,000-litre petrol tanker that fell. 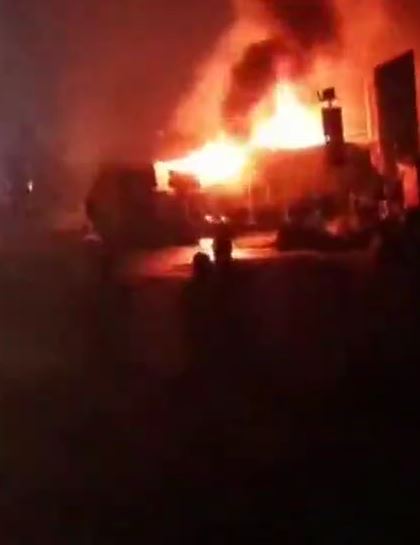 A 15-year-old boy identified as Oluwatobi Lawal has perished and his body recovered from the scene of the tanker explosion at Alagbado, along Lagos-Abeokuta Expressway.

The fire, which broke out on Friday morning, was as a result of a 45,000-litre petrol tanker that fell.

A video of his mother wailing over his death has gone viral on social media.

Speaking on the matter, southwest zonal coordinator of the National Emergency Management Agency (NEMA) Ibrahim Farinloye said, “The dead victim was a 15-year-old boy, Oluwatobi Lawal. The teenager was preparing to sit for WAEC exams and UTME next month. SHEMU has taken the body away.

“About 42 makeshift shops were consumed in the inferno. Transloading of the remaining contents into the underground tanks of the filling station is ongoing.”

Director of the Lagos State Fire and Rescue Service Margaret Adeseye in a statement said, “The spillage spread to the roadsides and the residents started to scoop the PMS, this nefarious activity ensured the fire outbreak.

“These people risked their lives, the service has warned residents severally, never to scoop PMS. However, the situation has been brought under control by the fire fighting crews.”