Nigerian Actors Who Got Married After Starring As On-Screen Lovers


In a case of life imitating art, some of these couples actually started out acting as on-screen lovers. 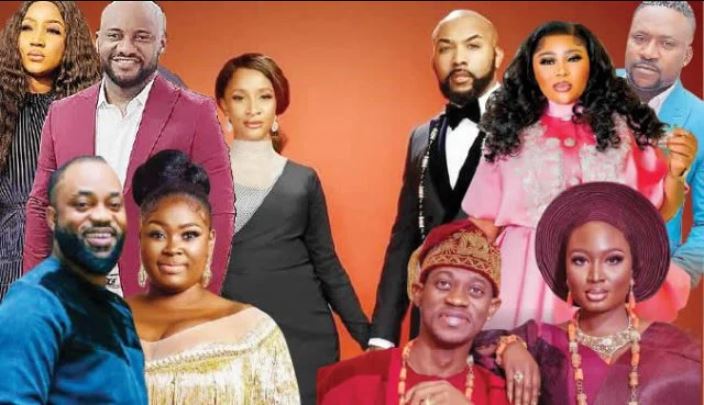 Without a doubt, the Nigerian movie industry, Nollywood has experienced some celebrity marriages over the years.

Actor, Yul Edochie, recently got people talking when he announced that he had married a second wife in the person of actress, Judy Austin. He also informed the public that she already had a son for him.

Before this, they had both acted as lovers in some movies, most notably, Naked, a movie produced by Austin and directed by Edochie.

Sources in the industry have stated that from acting together, the couple fell in love and decided to solidify their union.

Actor, Damola Olatunji, and actress, Bukola Awoyemi, aka Bukky Arugba, acted as a couple in two movies, Ipinlese and Odale, and their chemistry was so strong that they began dating shortly after.

As of that time, Olatunji was married to Raliat Sobowale but he apparently got enamoured with Awoyemi and he decided to pitch his tent with the latter, especially when she got pregnant for him. She eventually gave birth to twin sons.

Describing that period as one of the most challenging of her life because of the backlash she got from people who felt that she ‘snatched’ him from his first wife. In a previous interview with The Punch in November 2017, Awoyemi said, “People do not know the true story of an event but they just conclude and pass judgment. It was not easy for me back then because it was my most challenging moment. I am a very quiet person and it was a very gloomy period for me but I thank God it is over.”

However, some reports, which Sunday Scoop could not independently verify, claim that all was currently not well with the couple.

Celebrity couple, Olubankole Wellington aka Banky W, and Adesua Etomi-Wellington, acted as a couple in Wedding Party, and their love story has since transcended the movie. Banky has often said that though he had an interest in Etomi before the movie, the movie brought them closer.

They practically ‘broke’ the Internet when they got married in November 2017. In January 2021, the couple welcomed their first child, Zaiah.

Actor, Lateef Adedimeji, and actress, Bimpe Oyebade, popularly known as Mo Bimpe, have acted as lovers in several movies including All My Life, My Baby, Love Shy and That One Time.

Although they initially denied being in a relationship, they later announced their wedding plans. The couple tied the nuptial knot in December 2021 with several of their colleagues in attendance.

The trio became a trending topic on social media when during Ogungbe’s birthday in 2018, his two wives collaborated to throw him a surprise birthday party.

Some of the movies Ajiboye and Ogungbe have acted in together include Olukoni and Abara Meji.

Meanwhile, in an earlier interview with The PUNCH, Ogungbe maintained that he had a happy home. He had said, “I have a peaceful home. For those who think I would have about 20 wives like my uncle, all I have to say is they should mind their business.”