2023: Wike Declares Himself The PDP Presidential Candidate In The Upcoming Election


Wike made the boast ahead of the party’s primary election which has been scheduled for May 29, 2022. 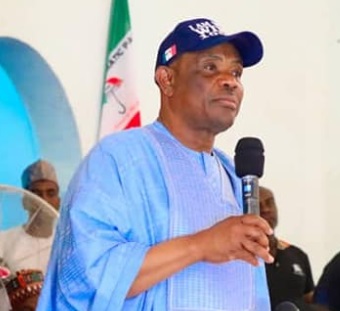 Rivers State Governor, Nyesom Wike has boasted that he's now the presidential candidate of the Peoples Democratic Party in the 2023 presidential election.
Wike made the boast ahead of the party’s primary election which has been scheduled for May 29, 2022.
The Governor while speaking on Sunday at Saint Paul’s Anglican Cathedral, Port Harcourt during a special thanksgiving service to mark last Friday’s Supreme Court judgement that returned 17 oil wells to Rivers State, said he's no longer an aspirant, but the party's canddate.
He said, “My Lord Bishop, you said I am presidential aspirant, I am not. I am the candidate of PDP. Rivers State has come of age. I will win and I will win and I will win this election.
“Even those of you who don’t believe, it is unfortunate for you. If you like, those of you who said you are delegates from Rivers State, you will vote another person, you vote is in vain because no aspirant will defeat me in this election. Not one.”
Speaking further, Wike said no form of conspiracy either from within his own people in Rivers State or from members of the PDP National Working Committee (NWC) will stop him from winning the party’s presidential ticket.
He also took a swipe at other aspirants, saying they are not as healthy as he is, observing that they go everywhere with their doctors out of fear of the unknown but he doesn’t do that.
The Rivers Governor added that his only strategy is God and he believes he would be victorious.
“Wherever they are, I don’t give a damn. Whatever conspiracy; whether you are National Working Committee, it is your business. All those people who are fighting me, they are having problems. You think it is my mouth; fight me, you fight yourself.
“I am happily going everywhere, campaigning and enjoying my life and you are suffering from high blood pressure. I don’t go with any doctor, but they are going with their own doctors, because they don’t know what will happen.
“I have no media team, I have no strategy team, the only media team I have is God. That is the only thing I have; I don’t have any other thing. All those who are moving, they say they are North, they are South, they are East, they are West; they should have known my history well and have known Rivers State,” he said.
Top Stories