The military in its reaction to the development had accused members of the Indigenous People of Biafra (IPOB) of being responsible for their death. 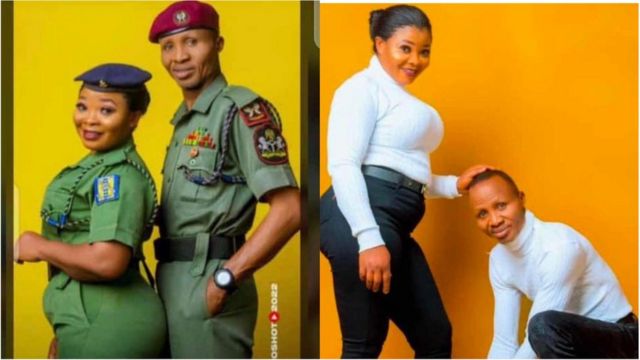 It has been revealed that gunmen who murdered a couple in the Nigerian army executed the act before their 10-year-old daughter.
The latest revelation was made by a family member during an interview with BBC News Pidgin.
Recall that we reported that the female military officer, Gloria Matthew and her fiance, Warrant Officer Linus Musa Audu (retired) were killed on their way to their traditional wedding.
The military in its reaction to the development had accused members of the Indigenous People of Biafra (IPOB) of being responsible for their death.
An allegation which was denied by the group, accusing the military of blackmail.
A family member of the female military officer in an interview with BBC News Pidgin disclosed that they were attacked not far from Banana Junction, Orlu, Imo State.
According to the family member, the incident happened around three o’clock, while they were travelling to Nkwerre from Lagos.
Gloria’s family member further stated that the traditional wedding was expected to hold on Monday, May 2nd in Nkwerre Local Government Area.
It was gathered that Gloria’s fiance hailed from Southern Kaduna but lived in Makurdi, while Gloria hailed from Imo State but was based in Sokoto.
The couple had arrived in Lagos state from Kaduna on the 26th of April to pick up Gloria’s mother who stays in Lagos so she could travel with them to Nkwerre.
The family member noted that she saw Gloria’s dead body on her WhatsApp status on May 1st after she called Gloria’s line which was answered by one of the gunmen.
She noted that the gunmen also killed a relative of Gloria’s fiance, adding that Gloria was killed in front of her 10-year-old daughter and mother who travelled with her.
Top Stories