A week after the president’s directive, the families said they were yet to get any information from the relevant authorities. 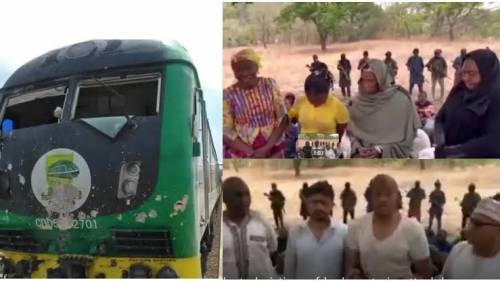 According to a report by Daily Trust, the relations of the 62 passengers abducted by the terrorists after attacks on the Abuja-Kaduna bound train say they have not received any update despite President Muhammadu Buhari’s directive to all concerned stakeholders, including security forces, to ensure quick and safe returns of the victims.

Buhari had during his Eid-el-Ftri message directed the Nigeria Railway Corporation (NRC) to set up a situation room for the coordination of the rescue mission for the passengers and a minute-by-minute engagement with the families of the captives.

He also charged the security forces to ensure quick recovery of the victims.

But a week after the president’s directive, the families said they were yet to get any information form the relevant authorities on their loved ones; the development that prompted them to express readiness to negotiate with the terrorists.

Speaking to Daily Trust on Tuesday, a relation, Imran Ahmad, said: “As I’m talking to you, no family member has been reached as directed by the Mr President.”

Speaking through their spokesperson, Dr Abdulfatai Jimoh, the families of the abducted passengers accused the NRC of disregarding Buhari’s directive to engage with them, minute-by-minute.

“Still, one week after this presidential directive was issued, the NRC has never contacted the relatives of the kidnapped victims nor established any situation room. This display of gross incompetence and insensitivity should lead to appropriate punishment,” Jimoh had said.

When contacted, the spokesman of the Nigeria Police, Olumuyiwa Adejobi, a Chief Superintendent of Police, said it was the National Security Adviser and the Defence headquarters that were in charge of coordinating security forces on the incident.

But the military’s spokesman, Maj.-Gen. Jimmy Akpor, said the military was in touch with the Kaduna State Government responsible for necessary updates on the matter.

He said not all issues should be directed to the military because “there are layers in the security business.”

Meanwhile, authorities of the NRC yesterday disclosed that apart from setting up the situation room as directed by the president, it was also planning to organise a special prayer to seek God’s intervention for safe release of the captives.

According to him, “We are doing everything possible to ensure their safety from captivity. Seriously we are on top of it and we are reaching out to the victims’ families through the Chairman of the Relatives.

He added, “We actually did. We stated this in our press release. We don’t want to enter into any altercation with them in the media. We are sympathising with those in captivity and we are even organising prayer for them for God to intercede in hastening their release.

“We are giving total consideration into efforts towards ensuring their release. We feel their pains also. They are our brothers, they are out sisters, and they are our children. We are sympathising with the plight they found themselves in. We are contacting the families.

“We have been discussing this with the chairman since we set up the situation room as directed by Mr. President. We are doing everything possible to ensure their freedom. And we didn’t say we are going to start running trains. We didn’t say so.”