Soldiers Trying to Sell 1,000 Rounds Of Ammunitions to Bandits Arrested In Zamfara 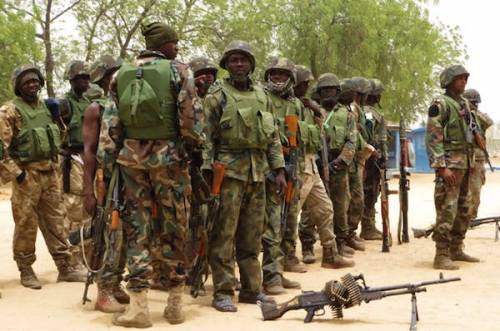 File photo
Three serving soldiers have been arrested with 1000 rounds of ammunitions.
Leadership Newspaper reported that the Nigerian army said the soldiers were planning to sell the ammuitions to terrorists for N1million.
The soldiers attached to the Forward Operations Base (FOB) in Galadi, Shinkafi local government area of Zamfara State were arrested for selling ammunition and military uniforms to armed bandits in the state.
The soldiers are identified as Pte Bala Nura, LCPL Ehoda Monday and LCPL Shehu Muhammad.
The soldier Pte Bala Nura according to sources confessed to selling 100 rounds of 7.62mm special each to the terrorists at the rate of N100,000.
He was also caught with 1,000 rounds of the same ammunition which he promised to sell to the gunmen for N1million.
The director army public relations Brigadier General Onyema Nwachukwu when contacted said he was not aware of such development.
Top Stories