Olivia Ortz was the music and choir teacher at the school about 50 miles north of Pittsburgh and Cody Ortz, her husband discovered the relationship after a group music trip to Florida in April and immediately reported it. 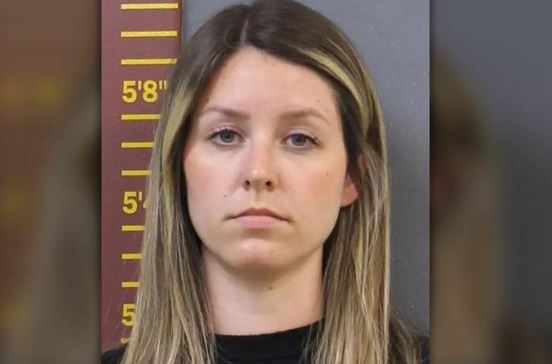 A 26-year-old Pennsylvania, US high school teacher who was having an affair with a teenage girl has been caught by her husband who reported it to the authorities.

Olivia Ortz was the music and choir teacher at the school about 50 miles north of Pittsburgh and Cody Ortz, her husband discovered the relationship after a group music trip to Florida in April and immediately reported it.

According to the NewCastle News, Police said Olivia Ortz’s relationship with the teen girl began in March and lasted till May even after her husband found out.

Police said Olivia Ortz and the teen met for physical s3xual encounters several times while Cody Ortz was not home.

As an employee of a high school, Cody Ortz was required to report any s3xual exploitation, abuse, or misconduct if he suspected it.

Immediately after her husband reported Olivia Ortz she was suspended from the job. She later resigned.

Officers searched the Ortzes’ home May 5 and seized Olivia’s iPad and cellphone, Youngstown NBC affiliate WFMJ reported. Despite the seizure, Ortz and the teenager continued communicating using Spotify’s messaging platform, according to Police.

The 17-year-old teen told police that she went to Ortz’s home after her husband found out but only to “comfort”.

Olivia Ortz has been charged with two counts of intercourse/s3xual contact with a school student and one count of unlawful contact with a minor for s3xual offenses, according to the NewCastle News.

However, she didn’t immediately turn herself in, even singing in a concert on Sunday prior to her arrest on Monday, May 16. She has been released from jail after posting $150,000 bail