He said that these groups of 56 from all walks of life, were richer than in Nigeria and if they will decide to go on holiday, the country will prosper. 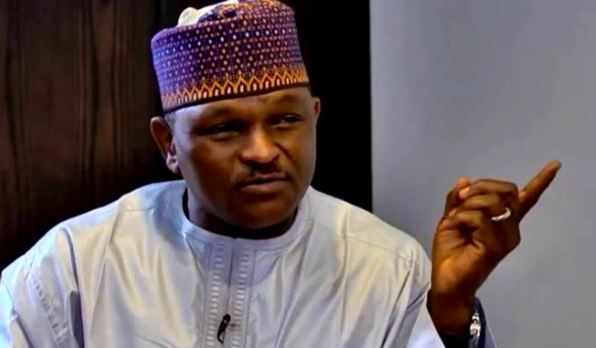 Major Hamza Al Mustapha, a former Chief Security Officer to late military Head of State General Sani Abacha, has alleged that Nigeria was being held hostage by a group of 56 persons who were eating the country like termites.

He said while he was in detention where he was tortured and told that he would not survive, he came to understand that these groups of 56 from all walks of life, were richer than in Nigeria and if they will decide to go on holiday, the country will prosper.

Al-Mustapha said if he becomes President in 2023, he will take far-reaching measures, without fear or favour to change the present state in which the country had found itself.

He boasted that if he becomes the President of Nigeria, he will end the Boko Haram insurgency that has bedevilled Nigeria, within 6 months.

Al-Mustapha spoke in an interview with the Hausa Service of the British Broadcasting Corporation ( BBC) monitored by Vanguard in Kaduna.

He said he would relocate and live in the Sambisa forest in Borno state which is regarded as the epicentre of the Boko Haram, where he will take the necessary steps to neutralize the insurgents.

According to him, he would ensure that what Almighty Allah said is being adhered to once he is sworn in as President, insisting that “I will deal with the problem of insecurity no matter whose ox is gored.”

He lamented over the manner Nigerian soldiers were now allegedly ” less active and not fully committed like before “, saying ” look at the soldier, all Nigerian soldiers I now see them like policemen of old because they’ve already become like the police…and the police that you’ve, is bad. They have spoiled. “

” I, here is what I can do in 6 months, people will be afraid of what will be done but that is the only truth. “

He said he will overhaul the military within that period of 6 months, which is going to be a painful exercise but necessary in order to restore the glory of the Nigerian soldiers the way they were known before.

“For instance; look at the silly acts of  Bako Haram, I swear if it is not possible in 6 months, I will demote all these senior officers and send them home. They would be prosecuted and must return the money given to them. I will probe them.”

” if I become the President I will. live in Sambisa, I will stay thee during weekend holidays and see if anything will touch me,” he said.

The former security officer to Abacha declared that he was willing to contest for the Presidency of Nigeria in 2023 under the platform of Action Alliance ( AA).

He said now is the time for him to be fully active in politics.

According to him,  the associations that contributed money and bought the nomination form for him were those that told him on which political platform to contest.

He mentioned that President Buhari is a person they admired and loved since their childhood, but the two major political parties had spooled Nigeria.

Al- Mustapha alleged that once Buhari trusts a person, he would never check on such person and therefore, those people surrounding the President were those who allegedly spoiled the country.

He assured that as President, he would start by making himself an example so as to have a corrupt-free Nigeria.