In the video, Toke Makinwa was seen twerking her backside as she gives several styles while posing for the camera. 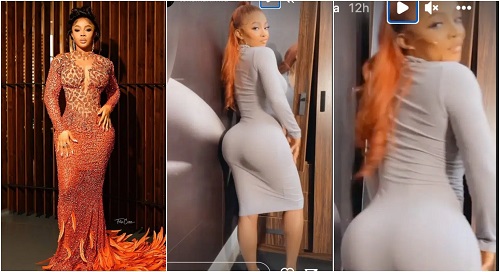 Trolls have mocked media personality, Toke Makinwa after she showed off her surgically enhanced backside.
Recall that the host had in the past confessed to surgically improving her backside.
However, she took to her social media page yesterday to show it off, but some fans are not having it.
In the video, Toke Makinwa was seen twerking her backside as she gives several styles while posing for the camera.
Some annoyed fans urged her to sue her doctor saying he or she didn't do a good job.

See comments below:
esskayboa wrote: “Goan collect ur money back ! Even sex toy hips de attractive pass this”
hardewunmii__ wrote: “Naaahhhhhhh, her hips aren’t even straight , the doctor should be sued. It’s giving squarebob squarepant”
herroyalcutest wrote: “Can someone tell her this is nonsense”
sapphire_x__x wrote: “The hips no balance now y’all should take lessons from Khloe”
floxy_ray wrote: “So doctor give u this kind thing and u really carry am Dey go ur house
estradas_ignacious wrote: “She looked better before oh.. be like she go touch am again”
nedu_ethel wrote: “E come be like say one hip big pass one”
Top Stories