The England striker got a yes when he went down on one knee to ask the big question on Wednesday, May 25. 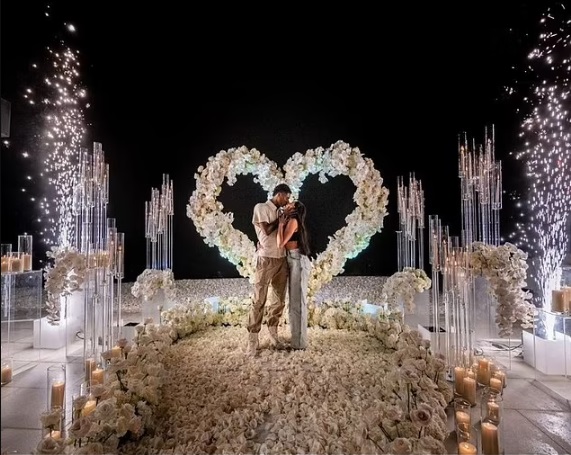 Manchester United star, Marcus Rashford has proposed to his childhood sweetheart, Lucia Loi.
The romantic proposal happened during their getaway in California.
The England striker got a yes when he went down on one knee to ask the big question on Wednesday, May 25.
The pair, both aged 24, have been dating since the age of 15 when they were pupils at Ashton on Mersey School in Greater Manchester.
Rashford had been planning the proposal for weeks and popped the question to Lucia at a lavish villa after they shared a romantic meal at celebrity seafood restaurant Catch LA, a source told The Sun.
'They went out in LA for a romantic night together on Tuesday and he proposed. It was extremely romantic.
'They celebrated afterwards with a group of close friends including his United teammate Jesse Lingard,' the source said.
Rashford shared news of the engagement on Instagram with a lovely image of them holding each other as they stood atop a bed of white roses in front of a heart-shaped archway.
Another source said: 'All involved are thrilled at the recent news of the engagement,' and spoke of Lucia's influence on the Premier League star, who has received plaudits for his charitable work off the field but has struggled to perform on it since having shoulder surgery.
'Lucia has been a big part of Marcus' life... offering stability, a sense of belonging and assurance that can be rare to find,' the source told The Sun.
Top Stories