The beneficiaries of her cash gifts, which included her security details, could not hide their excitement as she presented the cash sums in N1,000 denominations. 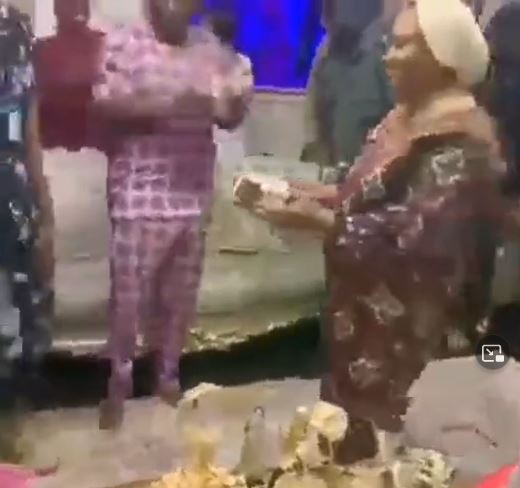 First Lady of Kogi state, Rashida Bello has been dragged online after she was seen in a video giving her aides N1 million cash each.

The cash gifts followed her recent donation of cars to some of her aides.

The beneficiaries of her cash gifts, which included her security details, could not hide their excitement as she presented the cash sums in N1,000 denominations.

Many on Instagram have criticised her for the gesture.

@Cossi Sunshine wrote, “A servant is sharing funds to owners of the funds and they are all excited.”

@drconfidence said, “You can’t try such in a developed world. Immediately the IMF and FBI will start investigating how you made such money as a public office holder’s wife or his relative. Well, bonanza for the aides.”

@drdaveobafemi commented, “Gift? With public funds? Whilst he’s yet to pay outstanding salaries owed to workers?”

@faniks3601 noted in Pidgin English, “Dem come video am to show us say we be mumu abi. It’s alright.”

@kemikalaiwo lamented, “How can this country ever be great again???? Such brazen face of corruption!!!”

@abiola_yussuff said, “And someone is still hoping Nigeria will ever be better?”

@linda_a_o said, “Our public funds dashed out just like that.”