Ubi Franklin lost to Cyril Omni, the Special Adviser on Security to the Governor of Cross River State, Ben Ayade. 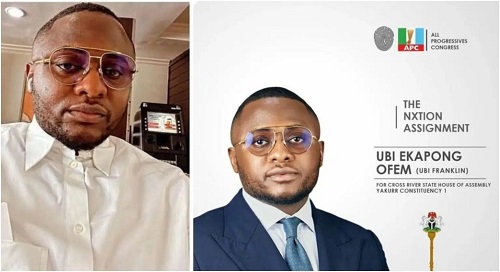 Nigerian music executive, Ubi Ofem aka Ubi Franklin has lost his bid to become the All Progressives Congress candidate in the Cross River State House of Assembly election.
He was to represent Yakurr Constituency 1.
However, things took an ugly turn after he was forced to run for his life at gunpoint by cultists who threatened him during the primary election, according Instagram blogger Cutie Juls.
It was gathered that Ubi Franklin lost to Cyril Omni, the Special Adviser on Security to the Governor of Cross River State, Ben Ayade.
Mr Omini secured 17 votes, while Mr Franklin garnered 12 Votes and another contestant Ubi Ubi Itam received 11 votes.
An eye witnesses who spoke exclusively to Instagram blogger Cutie Juls said when Mr Ubi Franklin arrived at the venue, some boys believed to be cultists approached him and asked him to leave or be prepared for anything that will happen.
According to the source, the election which was marred by chaos and violence caused Ubi Franklin to leave the venue of the election.
It was also alleged that the returning officer was made to sign the returning sheet under duress and the APC officials in the constituency are currently holding a meeting which is likely to see an annulment of the results as they believe the election wasn’t free and fair.
Top Stories