Thereafter, the mob pounced on him with clubs and also pelted him with stones before setting his body ablaze. 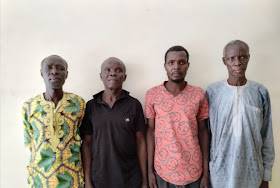 Benson Timothy, a 57-year old man, has been killed by a mob and his remains set ablaze after he was accused of witchcraft in Adamawa State.

SaharaReporters reports that among the mob were four middle-aged men, Ezekiel Kumtha, Awo Mesa, Ishaku Sanda, and Oga Dapila, who reportedly clubbed Timothy to death and burnt his corpse after they accused him of practicing witchcraft.

They were said to have accused him of causing the death of underage children in the community.

Thereafter, the mob pounced on him with clubs and also pelted him with stones before setting his body ablaze.

The incident happened on May 15, 2022 at Dumna village in the Guyuk Local Government Area of Adamawa State.

As further learnt, an argument had started at a drinking joint, when the deceased and his alleged killers engaged in a hot debate over the cause of mysterious deaths of children in the village.

The police on Wednesday, confirmed the arrest of the alleged culprits, saying "they're being prosecuted by Inspector Zakka Musa", at the Chief Magistrate Court, presided by Abdullahi Mohammed Digil.

In the First Information Report (FIR), laid before the court, Inspector Musa alleged that the defendants criminally conspired and attacked the deceased, Benson Timothy, on the ill-fated day.

According to the prosecution, the offences, which are criminal conspiracy and culpable homicide, contravened sections 60 and 192 of the State Penal Code Law, 2018.

After taking a "not guilty" plea on the 2 count charges, the judge ordered their remand in prison custody and adjourned the case to July 5, 2022.

Mob killings have been a disturbing trend in the country, as two suspects are still facing trial in the notoriously gruesome murder of Deborah Samuel, a 200-level student of the Shehu Shagari College of Education, Sokoto State, who was killed for alleged blasphemy.